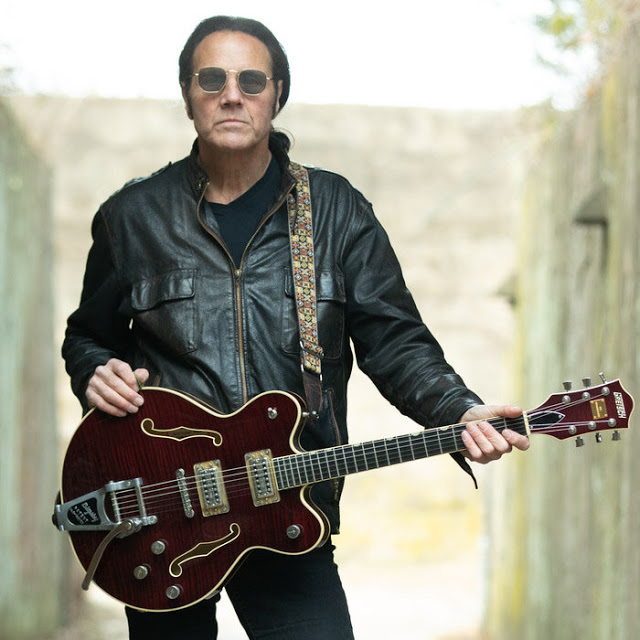 A Conversation With Guitarist Marc Ribler

Few guitarists can boast of the resume Marc Ribler has,  From writing hit songs across genres to producing band to acting as Musical Director for the likes of Darlene Love, the Rolling Stones’ Bernard Fowler, and Little Steven and The Disciples of Soul, chances are you know his work.  He is about to release his latest solo record, The Whole World Awaits You, on July 9 and his single “Shattered” is currently out everywhere.

Please press the PLAY icon below for the MisplacedStraws.com Conversation with Marc Ribler –

On the background of tracks on his new record – There’s probably only one song (written specifically for the record), and it was actually the last song that we put on the record. It was a suggestion of Steven’s. Steven (Van Zandt) co-produced the record with me. These are a collection of songs, probably the oldest song is from around 2005, a song called “War on Peace”, and they were written over about a 12 year period. I hadn’t made a record for a few years in the music business has changed so much. As we all know, there’s no resemblance to what it used to be. Essentially, it’s like corporations figured out how to how to make all the money, and artists are getting everyone to listen to them on Spotify. Meanwhile, they give pennies on the dollar to what the corporations make,  but not to digress. So the songs. The first single “Shattered”, was something I wrote, I used to go to Nashville in 2009, 2010, 11, I would go down every couple of months and do these writing hits with different songwriters and artists down there. “Shattered” was a song I wrote with a Nashville writer by the name of Christina Aldendifer. That is the only co-write, that and actually something that Steven co-wrote with me. He added a great part to a song called “Fly Away”  in the process of producing the record together. He had this idea and I thought it was great. So, I made Steven a co-writer on that song, the song I probably wrote six years earlier, but it kind of evolved into something newer and I felt better. So, yes, so the songs were written in like a 12 year period.  I went in to record the record in 2017, we recorded Soulfire with the Disciples of Soul and I had two months off from Steven and he had some commitments with Bruce (Springsteen). They went to Australia for a couple of months.  I figured this is a good time, I hadn’t made a record in a few years, I’ve just been doing different things like musical directing and producing some artists, doing some film scoring.  Nowadays, you have to be very diversified unless you’re fortunate enough to have a smash, it’s really challenging. But I guess I’m fortunate in that I’ve always done a lot of things as a musician and as a writer. So in the last 15 years, I’ve really kind of had to diversify, even more. So anyway, we went in in 2017 and we recorded three songs in 15 days at this place, Surefire Studios in Long Branch and I did some preliminary mixes and then got really busy with Steven touring for three years. :51

On the dynamic of working with Steven Van Zandt on his songs rather than on Steven’s – Steven is extremely hands-on with his own music.  I played on Darlene Love’s record that Steven produced, when it’s music that he’s producing solely, he has very strong ideas about what the arrangement should be with the instrumentation should be. So my job, when working on Steven’s songs is making sure we have the right musicians to have his vision come across as good as possible. Just kind of really organize the sessions. I did coproduce Summer of Sorcery and Soulfire with Steven but more so Steven’s really like the sole arranger with his music.  I sent him some music just before the pandemic, just as the pandemic started, he asked me what I was doing and I said I was finishing up my record. We were on the phone we hadn’t spoken in a few weeks.  I sent them to music and he said, “I have some good news and I got some bad news”, I go, “Ok, give me the bad news”. He says, “Well, let me give you the good news. So the good news is I love a lot of these songs”, and he says the bad news is, “I think I like to work on something with you and maybe strengthen a few things here and there”.  I said. “The bad news is the great news”.  It’s all sensational news. Plus, I know how brilliant Steven is, and he is such a historian. A lot of my music is has a retro throwback sense to it, the music that I grew up listening to. There’s so much common ground and we’ve worked together so much in the last seven years. That it was just the medicine I needed for the pandemic, for his input on my record and finishing it. 4:33

“Shattered”
On his mission as a Musical Director – I think it’s very important to capture the essence of what’s on the record, in some cases you want to reproduce things exactly the same. Some arrangements are like Shakespeare, you can’t really mess with them and other things, other songs, even songs I did with Darlene (Love) where maybe there was a solo or a guitar solo on a record and it was just the simple eight-bar standard amount of time, in a live setting the muse may dictate that this needs to be a longer solo or maybe, as you’re playing the outro of the song, Darlene is singing and wailing and the guitar needs to kind of interact with her or it needs to be a drum break down in the middle for something. So live is very different. So I think that an audience wants to hear their favorite melodies, they want to hear the things that turn them on about the songs. But I think there’s a license to take things to other places live and to expound upon the essence of something…When I first started working with Bernard (Fowler) Charlie Drayton was MD’ing, he was the musical director of a couple gigs. Charlie went out of town and Bernard asked me if I would put a band together. He just put out his record The Bura and when someone puts that faith in you, it puts you in a place of strength and confidence that they are connecting with what you can bring to the table. They think it would be an asset. So, when someone like Darlene, I think when Steven called me to be Darlene’s musical director and put her band together, he had faith that I would get the right players and really make sure that his arrangements were played as close to perfection, whatever that means if that’s possible. Same when I put Steven’s band together. It was getting people that really are the appropriate people. You could have 10 great musicians, but maybe only two of them are right for a certain project.  7:25
“Hand Me Down”
On writing for hard rock bands in the 80s and 90s – My first cut was with Lee Aaron. The thing that a lot of these hard rock bands needed was radio songs. They were very good at writing what you would call an album track, something that was maybe suited to their sound and. But a lot of them were deficient in hooks. So a lot of these bands I work with, I would just draw on kind of my pop sensibilities that I kind of developed growing up as a kid, listening to great melodies and great songs on the radio and was able to instill that in those songs…If I’m producing an artist, they’ll play me a bunch of songs. I’m very inspired when I listen to the song once, and it’s kind of like an earworm. It stays with you for some reason, and it’s sort of like an undefinable thing about it, it’s sort of a primal thing that happens.14:17
On the title The Whole World Awaits You – It’s a song that I had laying around. When I played Steven these songs, he kind of jumped up and down. It was his suggestion to name the album that and I thought it was perfect. It’s just good to have that (collaboration). I’ve always produced a lot of my music by myself. My first record I co-produced with my buddy Rich Mercurio, who plays drums with the Disciples. We don’t know what is going on right now. It’s like I started working on, as I mentioned, the record with Steven during the lockdown and it was sort of like we’re in this mystery land. What’s going on? Is it the end of civilization? Is it? As we’ve gradually gone through like a shit show of  politics and people have had to do a tremendous amount of introspection. It’s like who am I? What am I contributing? What do I bring to the table? It’s our lives. So, yeah, it’s really like an open canvas, in a way, because a lot of mystery is still there, but it’s really sort of the hope that we move forward and we’ve grown through what we’ve experienced the last couple of years and evolved and hopefully to a higher plane of existence because we have to coexist. It sort of encapsulated the whole record. 16:19
Little Steven and The Disciples of Soul “St. Valentine’s Day”
On any updates with Steven and the Disciples of Soul – Well, I know that Bruce is, everyone is, in kind of been in a holding pattern. I think Steven is kind of like all of us really kind of wants to get out. He was basically, like me for the most part, he’s been really locked down. He’s kind of just conducting his business from his home for the most part, and so now we’re actually going to get together and have lunch in the next week or so and just kind of get maybe just have a conversation about where things are. I know Bruce was talking about going out this year, but that might not be till 2022. I’m hoping we can continue our Teach Rock Initiative with Steven and I know he just joined forces with the governor of Connecticut. The Teach Rock Initiative is going to be part of the Connecticut school system, which is incredible. And for those who don’t know, it’s bringing that history of rock and roll curriculum to the school system. This is Steven’s brainchild. Steven’s been working on this for 15 years. So it’s good to see it, you know, flowering. 20:08
Follow Marc Ribler –
Facebook | Official
Share. Facebook Twitter Tumblr Email