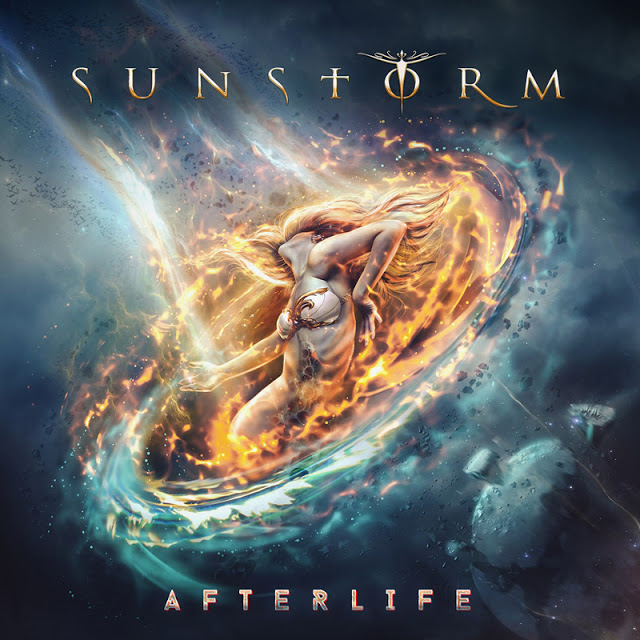 Few releases have come with as much anticipation or controversy as the new Sunstorm record Afterlife. After Joe Lynn Turner, the last original member, left the band many assumed that was the end. However creative force Alessandro DelVecchio teamed up with Lords of Black/Rainbow frontman Ronnie Romero for a brand new lineup of Sunstorm.  Ronnie recently took some time to talk about Afterlife and the rest of his career.

Please press the PLAY icon below for the MisplacedStraws.com Conversation with Ronnie Romero:

On joining Sunstorm and working with Alessandro DelVecchio – We are friends since many years already, we met like five years ago because of Frontiers’ Rock Festival. He’s a cool guy. We were following each other on social (media), talking sometimes, a good friend. He is a great musician and producer. Fortunately, we had the chance now to work together finally, we were very happy to join this. I just got the call from Serafino (Perugino) from Frontiers, asking me to join because they were looking for a singer. Obviously, I was really apt to do it from the beginning because I’m a huge fan of the Sunstorm project and I’m a huge fan of Joe Lynn Turner. So obviously I said yes, it was really easy. And that’s, as I told you before, is super cool to work with Alessandra finally. :57
On the decision to bring Sunstorm back to a melodic rock direction – They really want to go back to the vibe of the first record. I guess, I have no idea, but I guess I was one of the reasons that why Joe is not in the band anymore. To me, it’s great because as a singer, sometimes you really have this feeling to prove to yourself that you can do something out of your comfort zone. The people know me because I’m a heavy metal singer. Suddenly you have the chance to to to make something more melodic and more hard work on the vocal production side, you know.  I took it as a challenge and it’s I think it’s great. 2:33

On whether he was apprehensive to record a melodic record – No, actually,  I was waiting for a chance like this. I grew up listening to all those melodic bands, mostly American bands like Boston, Kansas, and that kind of thing with my father, rest in peace. I’m a huge fan of Journey. For example, one of my favorite singers is Steve Perry. Actually, it’s funny how the thing happens. At the time when I got the call from Serafino to join the band, I was with my fiancee. We were listening to Sunstorm albums.  She told me, “it will be great if you can sing something like this instead of heavy metal” because she’s a classic rock fan. We love this album, and we were listening to some Sunstorm records. Then suddenly I got the call from Serafino and we were happy. 3:44
“Afterlife”
On if he was involved in the creative process – It was not needed for me to get involved. No, I didn’t have that much ego to put some pressure that I really need to put my name on it.  I think when you get a song and the song doesn’t need to change anything, you need to sing it. To me, it was really easy because Alessandro is really good in this writing side and did really great songs. Normally when you go to the studio, when you do your own performance on the songs because you’re listening to the producer. And obviously, there are some things that you need to change because of your accent or your performance. Some words don’t work that good or the vocal lines or something. Alessandro told me, “Just do your stuff and enjoy it”, and it was great. 4:56
“Stronger”
On what he was told concerning Joe Lynn Turner’s departure – As a huge fan of Sunstorm and Joe Lynn Turner, my first question, when Serafino called me was about what happened with Joe. It was a natural reaction. What happened with Joe, is this going to be OK?  But that’s not my business. That’s not my life and I have huge respect for Joe Lynn Turner.  I love him as a musician and he did a great job in Sunstorm before. I think that all this kind of controversy comes because he did a great job before.  Well, in a way, I can understand the fans are not happy with this changing lineup. But I just want to ask the people just to give a chance to the record, because I think at the end, even if Joe Lynn Turner is not involved, I think is a great record. 8:04
“Swan Song”
On continuing to use the name Sunstorm – I guess it’s just a marketing movement. Obviously, Sunstorm is already a huge brand in the industry, so it makes sense to keep the name. Imagine how many times Ritchie Blackmore should’ve changed the name (for Rainbow). I think that’s not important at all. Because it was strongly related to Joe Lynn Turner there is a kind of controversy. But in the end, I don’t think that the name is that important for the listeners to listen to music. 9:25

On the status of Rainbow – I can understand, Joe, because it looks like I’m always chasing him. Nothing so far. We had some plans to make a tour before all this Covid situation happened. But then the lockdown comes in and obviously they stop everything. Now the Ritchie’s focused on the Blackmore’s Knight thing. So I guess obviously they are going to wait until everything goes back to the normality and try to set a plan. I don’t know if they’re actually going to do with me or with somebody else. But no, no information. 11:07

On ever playing live with Sunstorm – One of the main reasons when I join a band or a project is to have the chance to to to make it live.  I think this is a very important side of the music. When I go to the production side, when they’re recording the album, I’m always thinking how I’m going to sing this live. That’s very important because normally when you are not thinking about this, you get really overproduced music. So I’m always thinking on the live side and about how I’m going to sing this live. So in every project that I get involved in, there is always a chance to make it real on the live side. With The Ferrymen, it’s the same thing. We tried to make a couple of shows a couple of years ago. I didn’t happen it at the end because there was a clash of the schedules. But if we had the chance with Sunstorm, I think we’re going to make it because even with Alessandro and Simone, we have good chemistry, strong chemistry together. And it was really great to to to play together on stage. So if we can make it, we’re going to make it for sure. 12:43

On recording remotely – It was really easy for me actually to record the album. As I told you, Alessandro gave me a lot of freedom to put my own stamp on the performance. It was really easy because I was getting the tracks, going to the studio, recording the song, sending the tracks back and he was telling me, “That’s Perfect. You don’t need to remake anything. That’s exactly what I need from you.” The chemistry was really natural on this record. I think that makes a difference because nowadays, I just say because of the lockdowns and everything, you have a lot of bands doing a lot of records. You have all those quarantined videos where all the members are in different places. It is a little bit cold and you’re losing the vibe from the live side. I think the people, they really want to see bands and not just in studio projects. 16:20