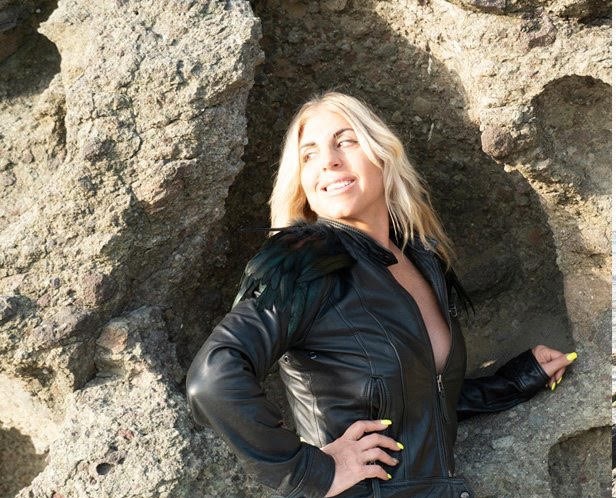 Once in a while, a voice cuts through the ordinary and stands out in the crowd.  Eliza Neals possesses one of those voices.  Her 2020 release, Black Crow Moan, showcases not only her powerful voice but a maturity in her writing that wasn’t seen in her earlier releases.  Eliza recently took some time to discuss this release as well as looking back on her career, working with some blues greats, and what the future holds.

On deciding to release a record during the pandemic –  I had just gotten back from my Spain tour and my Mustique Island Blues Festival, and all this stuff about pandemic wasn’t really there yet. But I had all this music done and I was planning to do it. So the pandemic hits and I’m sitting in my Jersey loft going, “What are we gonna do?  I’m sitting here bored out of my mind. I’m worried to death. I’m just gonna put this thing out now”. We moved the date up like six months and I was nervous a little. I’m like, “You know what? All I can do is put it out there and hope people who are at home so worried have something to listen to.”  Because it’s my own label, and I can change on a dime.  I don’t have to wait for people above me to say yes or no. We just said, “Hey, we’re putting this thing out”, and sink or swim, hopefully, everybody can relate to it because it’s kind of like a foreshadowing of events because Black Crow Moan is about hope coming from a place of disparity. So I’m hoping it connected with people. So it was kind of like I was compelled to do it. 1:00

On working with special guests for the record – It’s actually organic. What happened was, with Joe (Louis Walker), Lenny Bradford is the bass player who plays with Joe, and he’s phenomenal, and he’s on the East Coast by you. He started playing with me from the drummer I had met. And Lenny also is Joe’s bass player. So I went to see Lenny and Joe one night and Joe, I met Joe and I was like, “Wow, such a huge fan blah, blah, blah.” One thing another invites me to Mustique Island (Blues Festival) because he takes care of that, I said, “Hey, you want to produce a tune for me and guest on some stuff?” he said, “Sure”, and so it kinda just happened like that. So that’s why he did “The Devil Don’t Love You”. Then I asked him to do “Black Crow Moan”, I produced that one, which was like my favorite song on the album. Derek (St. Holmes) is somebody I’ve always known from Detroit from Ted Nugent days and I was in Nashville working with my buddy, Mike P who co-produces with me, engineers, he’s a songwriter. He’s also on this album, Mike Puwal. He said, “Hey, you know Derek’s in Nashville right now, you want me to call him”, and I go “Derek who”, he says, “Derek St. Holmes”. I said, “What! Hell yeah”. So we call Derek. Derek doesn’t call back for a few days,  like, what the hell happened to Derek? He’s out listening, asking people about me going like, “Well, should I?” He didn’t really know me. He had to go listen to everything he was like, “Damn, I’m doing this.” So coming from him with the biggest compliment that he actually called back and said, “Hell, yeah, I’ll do it”, because he had to do his homework. He came over and knocked it out. 2:23

“The Devil Don’t Love You”
On growing up with music and finding the Blues – I have always been around music, all kinds of music. You probably read I studied opera. I’ve toured with choir music. I sang Latin, German, French. I grew an Armenian, in Armenian church singing that (music), Southern Rock, Blues, Country. My brain is just one big piece of music. I don’t even know where I’m driving. So when it came to Detroit, growing up in Detroit, I would sit in it all the blues and jazz clubs learning how to finagle the stage and I would just be sitting there watching everybody, and they said, “Come on up”. I learned how to sing blues from sitting in at all the blues and jazz jams all across the city, from 18 years old to my early twenties when I went to music school, so I kinda learned how to do it. Every time I sing blue people are like, “You can sing that stuff, you could sing that stuff. ” I’m like, “Really? Okay”.  Something about my voice opens up when the blues is played and it gives me room to get out the pain or the joy or whatever I’m feeling, it gives me that room to do it. 5:13
“Never Stray”
On being “discovered” by the legendary Barrett Strong – This is a funny story. I worked at a health food store in Southfield (MI) where I grew up, and I’m in there and half the time there’d be jams, little jams in the back and stuff like that. I was singing, I think, in the back of the store. So this really nice looking guy, real quiet, comes in there like, “Who is this guy?”, decked out and diamonds and fur and all this stuff, I’m like, “Who the hell is this guy? What do you need?”  We’re talking, he says, “You sound really good”, I go, “Thanks”, he goes, “Well, here’s my card”, I go, “Well, who are you?”, He goes, “Barrett Strong”. At the time, I didn’t know that name. I knew the Temptations and Marvin Gaye. He says, “I’m Barret Strong, I wrote all the hits for Marvin Gaye”, and I’m like, “Yeah, sure.”  In my mind, I didn’t believe. I’m like, yeah, everybody tells you, you know how it is, I did this and they didn’t do anything. So I’m like, “Well, whatever”. So I took his card. I looked it up. I think it was in the nineties, so I don’t think the computer I could Google, so I looked at the encyclopedia and there he was. I’m like, “Oh, my God”. I told my sister we got to go over and talk. We went there, I believed him, we’re so nervous and they are gold records all over his house.We just were scared shitless. Honestly. We started singing for him. He loved it and he wanted to put us on his label. 6:40
“Black Crow Moan”
On becoming comfortable writing more personal songs like “Black Crow Moan”  – I’ll tell you what it is. I’ve written songs like that, but I didn’t really wanna sing them. I wasn’t ready to sing something so personal. So maybe I had the song kind of written but I didn’t have the maturity or the readiness to bear myself in such a way. So I think I was ready to just say, “You know what? I want people to know me better. So I’m gonna just go there”.  I’ve broken down a few times singing that song…It comes with, like you said, record to record you get, hopefully, I’m hoping most people this happens to happen to me, you get better and better, stronger and stronger. With the fans I meet, they tell me how those words helped them so much So now when I hear that makes me say, “Oh, wow, I should have been doing this earlier.” But like you said, maybe I wasn’t ready to do that earlier. So I’m gonna probably do more, a little bit more personal things. 10:55
“10,000 Feet Below”

On being a woman in the male-dominated club scene – It’s been, I mean, sometimes nightmarish, and I don’t want to knock anybody, but people are just like, they’ll have 20 guys play and (a woman) call(s), and they won’t even talk to you.  It’s like, “Well, you already have 20 guys in a row. Can you have one woman?” It’s not like the music sucks or something. They love the music. I don’t understand, it’s changing a little more now, but I’ve been totally discriminated against. Totally on both ends, I’m Armenian doing blues. People are like, “Oh, you can’t sing blues, please.” Then I play and they’re like, “Wow, where did that come from?” Then, I’m curvier, whatever. and they’ll go, “Well, whatever”. I was so honored in Detroit. They gave me the Detroit Black Music Award because they thought I sang blues good. That was like getting a Grammy. So, I’ve been blessed, and I’ve also been cursed by being a female, being who I am and what I’m doing. But it makes me stronger because I love it so much. When the truth comes out when people see it’s the truth and not some fake, phony thing, people start to say, “Well, wow, it’s really for real, this chick for real, it’s not an act .” It’s like I am what you’ve got. Whoever you see is what I am…When we did Buddy Guy’s (Chicago) and they let me in finally, we had two standing-room-only shows. You wouldn’t believe it. Buddy Guy came up, and now I’m one of the favorites there. But before it took me, I think two years to get a date. where But once they see,   it’s good. Me, personally, I like to have my own label because I think it’s just empowering for us to do our own thing. I don’t change my vision. You get to own your music any better than that? 12:46

On dealing with the pandemic and not touring – It’s been really sad. I said, “What the hell? Am I ever gonna get out of here and do this? I did this whole album. I want to play these songs.”  I was playing a couple of the songs prior to the pandemic,  testing them out on people. People liked it a lot and everything. And I’m like, “Wow, I can’t wait to have it all done and then just go on tour for it”. So now we’re just starting a year later to do it. I’m just gonna start playing everything. But I did go live every week,  unplugged from the first week after the pandemic hit, we were all freaking out and scared.  I said, “I’m gonna go live”, because people needed to hear something. I just went live every week, I think for, I don’t know, four or five months. So I felt like I was touring. But not really. 16:05

On future touring plans – Okay, so this is what I’m thinking now. Probably do a Black Crow Moan tour, but I’m adding also in the Sweet or Mean tunes, like “Pawn Shop Blues” and all that kind of stuff. So a merge of those two albums, then, of course, a few songs from prior albums. I’ll do that for about a year. Hopefully, whatever is open, Florida is open right now, and then in summer, I have festivals up north and Michigan and stuff. So I’ll do those or whatever else opens that’s safe, and I’m already working on the music now. 17:36