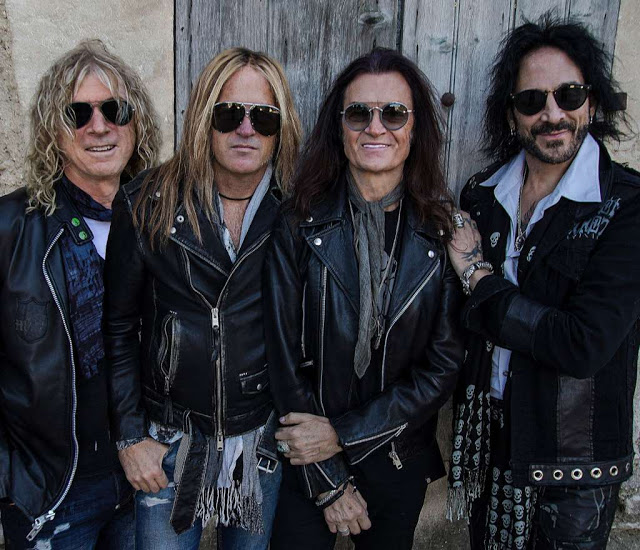 The Dead Daisies are a band that’s always evolving.  While an everchanging lineup could lead to an inconsistent output, The Daisies have returned at the top of their game.  Guitarist Doug Aldrich has been a mainstay for three records now and took some time for a return trip to the site to talk about the new lineup featuring Hall of Famer Glenn Hughes and much more.  Doug’s video kicks in just after the introduction. At about the 14:30 mark he begins to play a few quick classical pieces on his guitar.

Please press the PLAY icon below for the MisplacedStraws.com Conversation with Doug Aldrich:

On his relationship with Glenn Hughes – Well, we’ve been friends for years. So I knew that our paths were going to cross somehow. Originally Glenn was talking about doing a solo record and had kind of asked me to be involved. But then he wasn’t sure exactly when he was going to do it. Meanwhile, I got the offer to join the Daisies in 2016, so we were both doing our thing. He did his solo record, but then he went and was doing the classic Deep Purple, just really successful doing that for a couple of years.  I didn’t expect to do it, but basically, I found out from management that they had been speaking to Glenn about joining the band. They called me and said, “What do you think?”, I was like. “That would be amazing. That would be incredible.” I never thought of it because, you know, Glenn’s been super busy and. They said, “Call him, talk to him and see what you think”, and I call him, “What do you think, Glenn? Are you serious?”, he goes “Doug, it’s time for you and I to make some music and we need to do with The Dead Daisies. It’s going to be great. I’ve already got a couple of songs sorted out”, and I was like, “That’s killer, man”. So then immediately David Lowy and I had been working on music and stuff, but without knowing who’s going to be performing on it, we can’t really get locked in. But once we knew Glenn was coming in, we specifically designed some things for Glenn and Glenn did the same for us. We took them all to the south of France and did a very focused kind of preproduction sort of situation and got busy. 1:32

On writing Dead Daisies material with Glenn now in the band –I knew what Glenn liked. To be clear, Glenn doesn’t need anybody to write with, Glenn wrote a bunch of stuff by himself. Fortunately, once we got solid and tight as a family in recording, we all were able to put our best foot forward on each one so that we could be helpful to make each song the best could be. But when it comes to something that I’m working on,  I’m thinking about the singer I’m working with.  I would think about John Corabi or I would think about Glenn or I thought about David (Coverdale) or whoever. With Glenn, I knew certain things he likes. He likes heavy groups. He wanted to keep things really simple. But I snuck in a couple of things there, like the “Bustle and Flow” riff, I thought Glenn would really dig that. He goes, “Hey, I’m going for a really simple vibe”, I go, “OK, that’s cool. But what do you think about this?”  He goes, “I love the riff, but I can’t sing over that for a chorus.” So I said, “Well, let’s get a chorus for it, and let’s see what you think.” We tried a bunch of stuff on that song and it wasn’t happening. Finally, David Lowy came up with some chords and Glenn sang some. It was like, “Great, that’s it, man”. 3:40