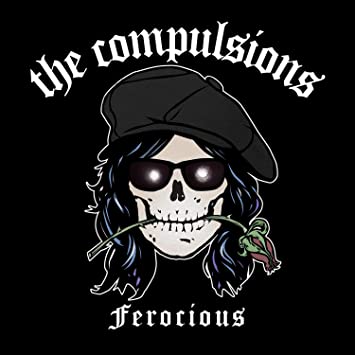 There are bands that wear their influences on their sleeve.  It takes a special band to combine those influences into a fresh and exciting sound, The Compulsions have done that on their third full-length record, Ferocious.  Frontman Rob Carlyle recently took some time to talk about the record and the story behind this band.

Please press the PLAY icon for my conversation with Rob Carlyle –

Much like the bands that influenced them (The Rolling Stones and Guns N’ Roses), the history of The Compulsions is a long and sorted tale. The original line up of this NYC-based band featured Sami Yaffa (bass) of Hanoi Rocks and New York Dolls and Guns N’ Roses members Richard Fortus (guitar) and Frank Ferrer (drums) in addition to Rob Carlyle on vocals.  Carlyle explains that the Yaffa/Fortus/Ferrer lineup began to disintegrate over time, “It didn’t happen all at once”, says Carlyle, “I think Sami moved first…the relationship (with Fortus) was never awesome to begin with…I just had enough of trying to make it happen.  I was probably closest with Frank by a longshot, but even that relationship, it just couldn’t keep going.”

So, what do you do when a lineup like that falls apart? You build a new one.  Carlyle recruited former Raging Slab bassist Alec Morton, current Sons of Apollo, and former GN’R guitarist, Ron “Bumblefoot” Thall, and special guests like Earl Slick and Ferrer and recorded the best record The Compulsions have done to date.  Carlyle says he turned to Bumblefoot because he knew the band needed a New York City “celeb hero” to step in, while he met Slick through former New York Dolls drummer Brian Delaney, who also plays on Ferocious.

A strong lineup can only take you so far, a great record needs great songs and Ferocious certainly brings those. In 33 short minutes, we get the Stones’ stomp of “Born On A Landfill”, the Motorhead speed of “Dirtbag Blues”, the classic Guns feel of “Addicted” and “Ferocious” as well as the more Chinese Democracy sound of “Band of Thieves”.  When it comes to writing, Carlyle describes his style by saying, “There’s always a groove. Everything has got a heavy, deep groove.  Whether it’s a slow song or a fast song it’s got to rock.”

In addition to the original material, the record also features two covers that, once again, bring in the Stones and GN’R influences, but with slight twists.  The Compulsions’ take on “Dead Flowers” owes more to Gilby Clarke’s version on his Pawnshop Guitar record than to the Stones’ original while the cover of “Dust N’ Bones” breaks the song down into a much darker version than the original found on Use Your Illusion 1.  When it comes to their unique take on “Dust N’ Bones”, Carlyle explains that it was driven by the “creepy and cryptic” lyrics, (I felt) “another take you could to on that song is you could do a slowed down, creepy, Tom Waits type of approach”.

While the Stones/GN’R thing may be a little too obvious throughout this record, The Compulsions certainly grab your attention with straight-ahead, raw rock n’ roll that combines the familiar with the new.  It remains to be seen if the core of Carlyle/Morton/Bumblefoot/Delany stay together past this record, but The Compulsions in any lineup are a shot of fresh rock that is badly needed.