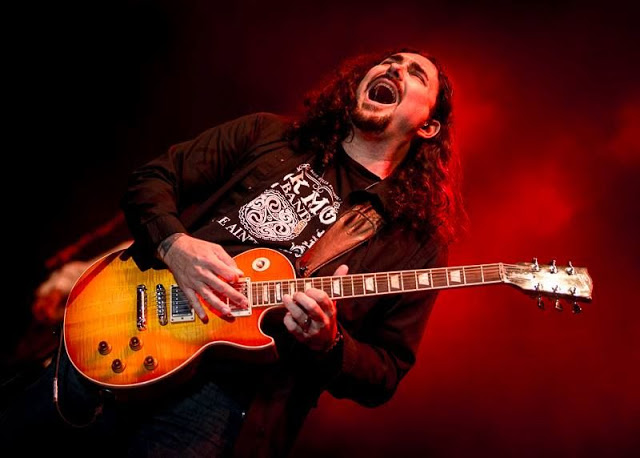 This edition of The Blues Fix features blues-rock guitarist Alastair Greene.  Greene just released his new record The New World Blues on Tab Benoit’s Whiskey Bayou Records and recently took some time to talk about the record, his influences and so much more.

Please press the PLAY icon below to hear my full conversation with Alastair Greene:

Alastair Greene was born in Santa Barbara, CA, and attended Berklee College of Music in Boston, MA, but developed a love for the blues while in high school.  While heavily influenced by the great 80’s guitar players like Eddie VanHalen, Jake E. Lee, and Vivian Campbell, Greene discovered the blues through a stack of records loaned to him that featured The Allman Brothers, BB King, Johnny Winter, and others.   Throughout his career, Greene has woven his love of rock and blues into his own unique style.  That style has never worked better than on The New World Blues.

For this outing, Greene explains that he wanted a more blues-centric record than his last release, 2017’s Dream Train, which he describes as more of a classic rock record.  While playing at the annual Big Blues Bender in Las Vegas, Greene struck up a friendship with the legendary Tab Benoit who then reached out to Greene when he formed his own Whiskey Bayou Records.
Most of the record was written by Greene in February of 2019 while on a break from a tour with Sugaray Rayford, however, Greene was excited to take advantage of Beniot’s Louisiana studio and two of the standout tracks on the record, “Bayou Mile” and “Heroes” were written in the studio and are steeped in the Louisiana swampy blues sound.
“Living Today”
The New World Blues is a perfect combination of all of Greene’s influences. There is the more rock-oriented sound of the leadoff track “Living Today”, the traditional blues feel of “No Longer Amused” and “Alone and Confused”, and the amazing slide work on the title track.  Of that slide work, Greene says he got into slide playing early after hearing Jimmy Page and Lee’s work on the classic debut from his post-Ozzy Osbourne band Bandlands but it was seeing Warren Haynes with the Allman Brothers that really got him into slide playing.
“Alone and Confused”
As touring has ground to a halt under the pandemic, Greene has taken to social media to get his name and music to the masses. He enjoys engaging with his fans and sees the importance of being active as a way of getting his music heard. He also sees it as more than just a marketing tool, “a lot of people are at home alone or at home wondering what the hell is going on. And I think if you can bring a little laughter and a little bit of light into their day by way of popping on Facebook or posting your favorite Van Halen record or whatever it is on your Instagram, then I think that’s a good thing. And I think it’s it’s healthy for everybody.”
“Bayou Mile”
In our conversation, Greene perfectly summed up his style, “I’m a blues-rock artist”, he says, “I love the blues and I love rock”. The partnership he has created with Tab Benoit brings out the best of both of these worlds.  The New World Blues is much more than just a title, it’s a calling card.  Alastair Greene shows his mix of rock and blues is the next step in the evolution of modern blues guitar.