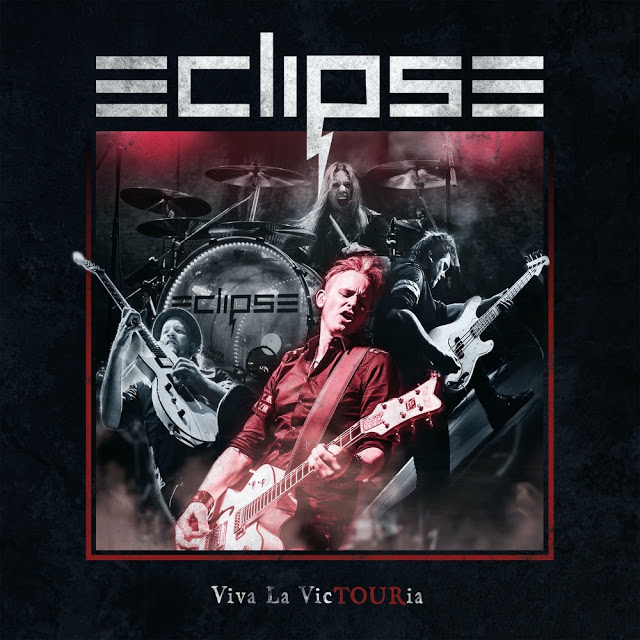 Over the last 20 years, Sweden has become the epicenter for a vibrant melodic rock scene.  Leading the wave of these great bands is Eclipse.  They just released their first live record, Viva La VicTOURia, and vocalist/guitarist Erik Martensson sat with me to talk about it.

On finally releasing a live record – Well, I know fans have been asking for it and we said, “Yeah, we should do one of those”, and it’s just it has never happened. And because when you play live, there’s so many, especially festivals and stuff, it’s just you have so little time to prepare and you want to have your own gear and you want to have a proper concert where everything is the optimal chances to perform good.  And it’s just it just never happened. But this video was filmed during one of the gigs we did in Sweden over the tour. We are supposed to be touring for 2020. So Victor (Crusner), our bass player, he works on video and he has some friends because it was his hometown. So he asked some friends, can you come over and film? Grab some beers and just bring your cameras and film the gig. Maybe we could do something for social media. We didn’t think so much serious about it. And so we recorded the multitrack from the console. And after the gig, it was a great, great, great crowd was on the 21st of December, just before Christmas and after Christmas, we all started looking at some pictures from this like this looks really good. And I just brought up the multitrack and listen to it as it sounds really good as well. Then a couple of months went by and then the whole pandemic started to become really serious and everything was shut down. And then we just had the time. Just let’s have a look and have a proper listen to what we recorded. And so it was kind of art by accident, wasn’t supposed to be a live album, but when we started working on it, it was like this is material for a proper release. :58

On how the band started – They say we’ve been around for twenty years. Well, it’s kind of true enough, (Magnus) Henriksson (guitar) and myself, we met twenty years ago at a music school in Stockholm. I was from the countryside and I didn’t know anyone. I just come to one of those fancy music schools where everyone played jazz fusion rock and  I  played hard rock and guitar. I went there as a musician and I went up to one of the rooms and by the stereo, there was this guy, long-haired guy, sitting and to Deep Purple, I was like, “Hello, my name is Erik. Oh, you like Deep Purple?” He started shouting at me, “Oh, you like Yngwie Malmsteen as well?” “Well, yeah, I do.” And then I couldn’t believe it. There was someone like me there. We immediately started playing guitar together. It was like this guy, he loves AC/DC, he loves the old sixties music. Every box was checked. We had the same kind of musical preferences and that’s how we hooked up together and started making music. 3:12

On the rock music scene in Sweden – You know, maybe it’s not as big (as New York or L.A.), but there are some really big at least pop artists that’s come from Sweden. But there’s a lot of great rock bands from Sweden. I think it’s the same thing with the whole Sunset Strip phenomenon or New York in the old punk era, everything, bands inspire other bands.  Because if I see, if I buy a record from a band from America, from L.A., it’s so far away. They could be from Mars as far as I’m concerned. But if you see a band in your home town doing it and they’re releasing records, there are really good and people like it and people buy the records and they go on tour,  they are real. And you can see that. If these guys can do it, we can do it. I think I think that’s as simple as that. 5:00

On eventually touring America – Touring America is not simple when you’re not a famous band, you play in the worst places ever. And if you’re going to make a proper tour throughout America, I think there’s going to be some pretty bad places we end up playing in because no one, we can’t get paid because no one knows the band. So I think that’s the only way of doing it is being an opening act band and start from scratch. We started touring in Europe, we started at the worst places, in the smallest places. We play in front of five people in some places. And next time we came there were fifty-five people and next time there were one hundred fifty people. And it’s just that’s how we’ve been building this band from going in a shitty car to expanding to night liners to crew to bigger venues. And I like it, it’s that’s how it should be done, it’s the proper way of building a band. Because when you do it like that, you build your fan base for real, real fans. But when you do a buy-on and your opening act, of course, it’s a lot of people at the concerts and a lot of people you can put out the pictures from stage of a lot of people, but they are not there to see you. Hopefully, we’ll go to America and do a proper tour someday. 6:34

On the band turning a corner with 2012’s Bleed & Scream –In the early 2000s, this kind of music, the melodic hard rock, was so out of fashion, people were actually for real laughing at us because we played the stupid music because it was so out of fashion and it was really hard, you couldn’t get gigs at all. You couldn’t even play at the local pub because no one wanted this music, was just impossible everywhere. And so we tried the first two albums, which are more like released demos. We didn’t know what to do because we wanted to do melodic rock. But we also tried to be kind of modern. But we failed because we didn’t do what we wanted. We didn’t follow the music that we wanted to do and then put in 2008, we did one record. We are like, “Screw it, let’s do a record that’s so out of fashion, just do music that we love,  just do it for fun”.  So that’s how an album called Are You Ready to Rock? (came to be). That’s the whole title as well,  just a stupid title. Everything is let’s do something that everyone will hate. And the funny thing is that that’s the first record that people are like, “Wow, this is really good”. Like, are you kidding me? You like this? We didn’t think people would like it at all. But on that record, we tried to do something. Every song you listen to on their record, you can you can hear that it sounds like something. That sounds like a Rainbow song or a Whitesnake song or whatever. You can really hear the influences. But what we did Bleed & Scream, we tried to skip the influence to try to find what Eclipse sounds like. And that’s the first time we said, “Let’s do something on our own and stand on our feet”. And that really paid off. And that’s when we when we took off as a band. 10:15

“Driving One Of Your Cars”

On the upcoming release by W.E.T. – It’s easy to say at your latest record is your favorite, but I think this might be my favorite W.E.T. record It’s more uptempo. It’s it’s more fun. It’s I don’t know, I really like it.  I think Jeff (Scott Soto) is singing better than ever on this one because usually he’s touring every day of the year, almost always on tour, and your voice gets really tired when you tour a lot. I couldn’t sing an album after a tour. I would probably have to have a couple of months relaxing if I want to do my my best vocal performance. But so, Jeff, all of a sudden, there was no touring for him anymore, so I think he sings better than ever. I think he;s never been singing as good on W.E.T. record before. 14:03