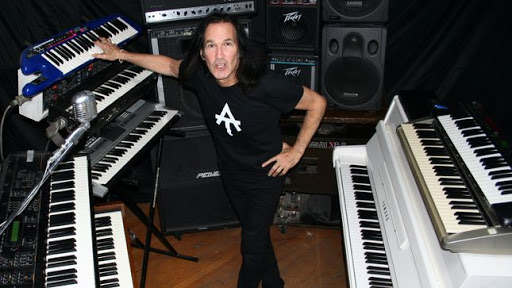 American Tears is a band that stands alone in the rock world.  Most rock bands rely on layers of guitars to produce a heavy sound, American Tears and it’s frontman Mark Mangold do it all with keyboards. A throwback to Keith Emerson and Rick Wakeman, Mangold uses everything a keyboard can offer to create modern, vibrant rock records.  The band just released its new record Free Angel Express and Mark took some time to return to the site and talk about it.

Please press the PLAY icon below for the MisplacedStraws Conversation with Mark Mangold:

On the sound of American Tears since reforming in 2017 – Well, it’s really refreshing to get back to keyboard’s and revisit synth solos and organ solos, and things like that that I haven’t done in a long time and I’m not even sure, really, people have heard that much of . You get a lot of questions,  “how do you get that sound with your guitar?” And it’s like, “No”. So we’re using a lot of keyboards, organs, a bunch of synths, Mellotron, clavonet, a lot of the vintage keyboards that were used back in that day, plus some more There’s a lot more things available to keyboard players now. Really makes it a good time to be alive as a keyboard player. And I would say also the freedom that this band or whatever seems to allow could be a five or 10 minutes song.  I mean, with this, the mentality is not even so much a formula, normal song. It’s about just going to where the music wants to take you and exploring a lot of these keyboard sounds And as in the early 70s, which was Vietnam and Nixon, there was kind of a mindset in those days that was a bit revolutionary and a lot of people dealing with authority and crazy political shit going on and it kind of felt that way over the last couple of years as well. So it kind of put me both musically and just the whole vibe of that I was feeling when I was doing American Tears all those years ago. :47

On having a guitar-free rock band – I don’t think about it. I don’t play guitar. I have other bands that  I have access to guitar players. But the nature of American Tears has always been kind of keyboard’s and it’s just a different kind of tapestry. I am a little obsessed maybe with it, I have beenvfor a long time, American Tears then morphed into Touch, which was thousands of vocals…But American Tears is really just creating these lush tapestries with all these, people say “keyboards”, but keyboards means elephant sounds, keyboards means strings and choirs. And you trigger them maybe with a keyboard, but it really it’s 30 or 40 different instruments. They’ve actually just invented a new thing where guitar player can now play MIDI like a keyboard player just so they can hook right into the Mac or the synthesizer and they can basically now play keyboard parts on the guitar. So it’s starting to go both ways. They also have some amazing new plug-ins for keyboard players that sound exactly like guitars, which I’m getting pretty deeply into now and probably will be doing a lot of that over the next six months and some projects that I’m working on. 3:15

On whether the record was impacted by the pandemic – Not really. It  takes time to mix it and then you’re waiting for the mastering guy for a month or two months. And then somebody was helping me with it, got sick and his kids got sick and then his wife got sick. You know, it was terrible. They’ve come out of it and they’re OK, So I know a couple of people who didn’t make it, which is terribly sad and terribly tragic. And then, of course, the time to release. I mean, it was done, I guess was done in May maybe, and then I played it for some people.  Do you want to put this out? It takes a while to get that stuff together as well. 5:40

On the lyrical content of Free Angel Express – Some of them are free associative. Some of them like “Woke”, “Are you woke?” is pretty, pretty straight ahead, wake the fuck up, “Sledgehammered”. Yeah, some lyrics come in different ways, some of them come in dreams and some of them just kind of like… “Free Angel Express” was just a phrase I thought of. I didn’t even know what it meant, I just I like Free, Angel. It just kind of paints a picture. And it took me about three months to realize it was a train express. When I had to create the album cover I was looking around the options of  what could we use. Holy shit, expres, a train, so dumb, you know? And then boom. So I sketched something, a three year old drawing of this thing, that Stan Decker, the amazing artist, turned into this amazing album cover. So sometimes you don’t know what the lyrics necessarily mean. For instance, I just posted “White Flags”, off the last record, which maybe was lyrically ahead of its time, but now after the election, I think it’s very relevant. Everybody’s got to, I think there’s a line, “Taking off the armor, calling off the war” in “White Flags”, so mayby was a year before (its time). There’s no time line in in other dimensions or channeling. So sometimes stuff comes to you that might not be immediately relevant or you might realize what it meant years later even. Though I don’t think about it too much, I kind of like to paint pictures. I like ethereal. And I think certain things have various interpretations. I’ve heard a couple of interpretations of some of the songs that’s like, “Really?” Good if that’s what it means that you fine. But yeah, it means different things to different people. 8:50

On the sound of American Tears – I hate genres. The word “prog” did not exist when this was happening. Then Yes was pop and then Yes became prog and Jethro Tull was, or any of these bands, Zep. Very long songs. What is Kashmir? You just can’t give names to this stuff, it’s just music and it is what it is. And it’s kind of everything I’ve ever heard or felt that’s filtered. I mean, to me, “Not for Nothing” is kind of almost a Led Zeppelin riff. If it was done on the guitar, it’s done on a grimy ass Hammond organ. So I love doing riffs with organ or synth and doubling it up. So that’s my instrument. So whatever it is, it comes out. All right, Mellotron, King Crimson, they made it very popular as did 10cc. It’s a beautiful string instrument, but you can apply it to many, many things. You can create these lush tapestries. And you add a couple analog synths to it and maybe a horn over and it becomes this animal that is not a Mellotron or not a synth or not an organ. It’s just this animal that kind of hopefully for me, I mean, I’m going to make the hairs on my arms raise up when I hear it on these beautiful speakers that have a nice bottom. So I’m just trying to get the adrenaline going. And another example, “Rise to the Light”, beautiful organ. Everyone loves Procol Harum. So I spent a day listening to Procol Harum. In New York I have my Hammond organ. I don’t have it here in Sweden, unfortunately, I miss it. But I spent half a day getting the organ sound on the Hammond and listening to Procol and getting it on the computer. So I really want to duplicate that Procol Harum sound, which I, I think I got kind of close to on “Rise to the Light”. So it’s just little excursions into things that are created with keyboards. 11:25

On not being able to tour – It is a big setback because the way we used to get this kind of music out there was to go out and play and build an audience. American Tears in the early days, played some amazing tours, Gentle Giant, Gary Wright, Peter Frampton at arenas in front of 20,000 people. I mean, we played a lot. We got exposed to a lot of wonderful venues, but now that’s taken away from so many people. How do you get out to the people? And it’s pretty much online. Maybe you do a video. We just did a video with the guys and Alex (Landenburg, drums) is in Germany and Barry (Sparks, bass) is in Texas. I’m in Sweden. So you have to do these things in your studio. And somebody edited them together and you try to get some excitement. But it’s doesn’t feel or sound the same, or as much fun as being in the studio and and doing it because the camaraderie was a big part and half the fun of this whole thing. So, yeah, it’s a setback for a lot of people. 14:12