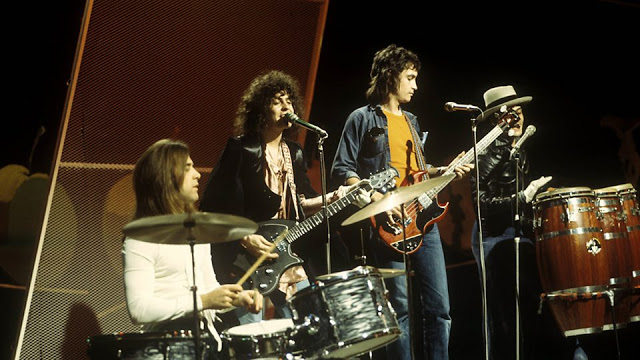 Every year there is a long list of bands snubbed by the Rock & Roll Hall of Fame.  The kings of Glam Rock can now be removed from that list.  On November 7, 2020, T. Rex will be finally be inducted into the Rock Hall.  Of the four members chosen for induction, Marc Bolan (guitar, vocals), Steve Currie (bass), Mickey Finn (percussion), and Bill Legend (drums) only Legend survives and recently took some time to give an exclusive to MisplacedStraws about his time in this iconic and influential band.

Please press the PLAY icon below to hear the MisplacedStraws.com Conversation with Bill Legend:

On meeting Tony Visconti and joining T. Rex – I’ve been playing (drums) since I was, like, 12. And I was in the middle of an apprenticeship in commercial art in London but I’ve always been playing in bands, they kinda went side by side, the music, and the art. There was a local band I played for when I just married and I was introduced to (the band) Legend and we did gigs all over the UK, colleges, clubs,  the London clubs. We were basically quite an original band as well. We had a good frontman. who wrote the material. We were managed by David Knights, who was, I think, the original bass player for Procol Harum. Anyway, through him we had a record deal, with Vertigo, I think it was.  We were put into a studio in London and Tony (Visconti) was none other than the producer. So it was through that introduction and then he asked me later if I was interested in laying down some tracks for Tyrannosaurus Rex. That was basically my introduction to Tony. 1:30