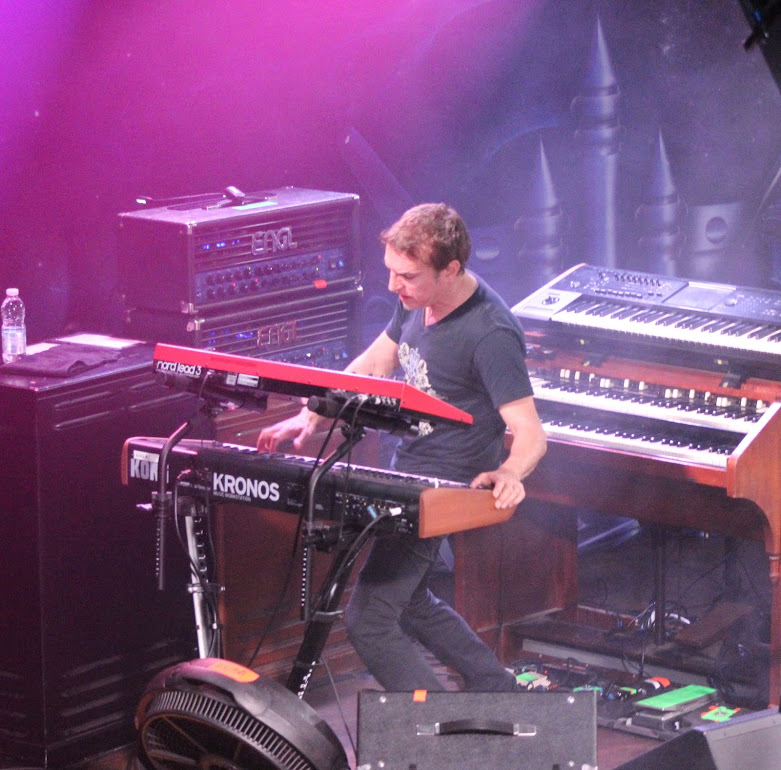 Chances are that if you listened to music over the past 30+ years then you’ve heard Derek Sherinian.  Whether it was playing with Alice Cooper or Joe Bonamassa, as part of Dream Theater, Black Country Communion, or Sons of Apollo, or on his own solo records, Derek has done it all.  He’s about to release his new solo record, The Phoenix, and took some time to talk about it.

Please press the PLAY icon below for the MisplacedStraws.com Conversation with Derek Sherinian:

On the gap between 2011’s Oceana and 2020’s The Phoenix – I thought it was time to take a little time off. And then I formed, in 2016, Sons of Apollo with Mike Portnoy, and most of my creative was going towards that band. And then about 18 months ago I just felt an urge to make another solo record because it’s been a while and I got a new solo deal and started writing some ideas and called Simon Phillips up, who’s been a longtime collaborator and partner on five of my past records. And we, over a five day period, wrote the bulk of the structure and compositions on The Phoenix, and we figured out what players we were going to have on as guests. :52

Photo: Jeff Gaudiosi
On picking the right guest for a song – Sometimes I’ll write a song and I’m not sure who I think would be best on it until the composition’s complete, and then I can sit back and say, “All right, this guy would be great on it”. Or if I know that I’m going to be writing with a particular player like Kiko (Louriero, Megadeth), for instance, on this record. This is the first time we’ve ever worked together and we wrote the song “Pesadelo”, and that’s a great way to feature new artists on recordings that I haven’t worked with before, and I always want to keep my ears open for great players. 2:57
“Dragonfly”
On his dream collaboration – The very, very top of the list is Jeff Beck. That would just really be awesome to play with him in any capacity. But I would love to do a recording with he and Simon Phillips. Whether it’s on his record or one of mine, it doesn’t matter as long as it happens. 3:51
On what makes a good collaborator – Musicality and people that play for the song. Everyone that I choose, all of these people are great in their own way. But one of the things that stand out is that they all have identifiable styles on their instrument and they stand apart from the rest. And I always have been attracted to those kind of players. And that’s how I try to be on keyboards as well, to have my own voice where it’s identifiable. No matter who I’m playing with, you could tell that it’s me. 4:23
“Empyrean Sky”
On the effect of Covid-19 on timing and touring – This schedule has been in stone prior to the lockdown. So just when the (Sons of Apollo) tour got canceled, it gave me more chance to speed up the overdubs…(The) first step is that we have rescheduled European dates with Sons of Apollo in May 2021, and then we have four South American dates in April 2021, so step by step, let’s keep our fingers crossed that things get figured out and we can all go back to work and tour and enjoy concerts again. 5:54
On recording “Them Changes” with Joe Bonamassa and the future of Black Country Communion – It’s always a pleasure to play that song. I loved it when I played with Buddy (Miles) and reliving it. Joe knew of my history with Buddy and we were figuring out what song he should sing and he suggested “Them Changes” and I thought it was a great idea and so did Simon. And so we did a great recording of it. It’s coming out as our third single, September 4th in a couple of days, and we shot a great video to go along with it that’ll come out as well…Because we always keep in touch all the boys, the brothers of the Communion, and we’re talking about doing something next year, not sure what month, but we’ll figure it out. But it’s time for BCC5 7:35
“Them Changes”
On what the title The Phoenix means to him – I liked the words and it just struck me that we were in a time of despair with the lockdown. It felt like we were in ashes. And this record, I felt, was a ball of fire ready to emerge because I was feeling strong about the music. And I saw (the title) The Phoenix and there was a friend of mine who suggested it, a really good friend of mine out of all these people. And I just immediately said, boom, that’s it. And that’s what I feel like my record is during this time of despair, I think it’s such a kick-ass record. People are going to just gravitate and love it and it’s going to rise out of the ashes. 11:23
Follow Derek Sherinian:
Facebook | Official | Twitter
Share. Facebook Twitter Tumblr Email