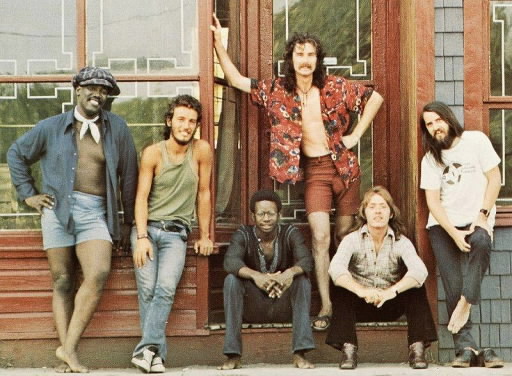 There has always been a mythology surrounding Bruce Springsteen & The E Street Band.  Rising from the bars of the Jersey shore to become the greatest live stadium act in rock, their history is well chronicled, but founding drummer Vini Lopez took some time to tell his story.

Please press the PLAY icon below for the MisplacedStraws Conversation with Vini Lopez:

On the origins of the E Street Band – (Southside) John (Lyon) and I, we were in a lot of the same classes together, he’s right next to me in the yearbook, his picture and my picture together. In those days, before UpStage,  I played with Sonny, and the Starfires with Sonny Kenn and the fellas in that band. We went on for a while, and then I became friends with Garry (Tallent), and I went over and I started playing with him and Tom Woriero and Ricky DeSarno in the Moment of Truth that was like, the end of ’66, 1967. That’s when we all kind of graduated high school. So during high school, I was actually, it was Sonny. But after we graduated, or that year, that’s when I actually started playing with Garry.
Danny (Federici) and I, this is after the Moment of Truth, I started playing with the Billy Chinnock, we had a band called the Downtown Tangiers Rock and Rhythm and Blues Band. It was Danny and myself and Wendall on bass and Billy Chinnock on the guitar and he was a singer/songwriter. We toured with the Electric Circus and we did 40 dates out with the Electric Circus…Bill wanted the bass player Wendall to sing lead in the band and he wanted to bring Garry into the band, but, Wendall didn’t want to hear none of that plan. So what happened is the band broke up.  It’s pretty simple from there. Danny and I still wanted to play together, became friends, and we were looking for guys who could write songs so we could do original music and not have to go play in the gin mills that we all played in, we didn’t want to do that, We wanted to do original music and we went in search, and it was a few, a lot of guys around that that we looked at. But there was only one guy. When I first met Bruce, when I went up to him, I said, “Hey, I just want to talk to you for a minute, I’m Vini”,  and he said, “I know you play with Sonny”, Bruce says to me, So I said, “Yeah, I did”, because Bruce used to come watch Sonny play guitar cause he dug the way that Sonny played. He says, “I know you”,  and I said, “Danny and I want to make a band, do you write songs?” He goes, “Well, I’ve written a couple.” Think about that for a minute…”I’ve written a couple”.

On recording Greetings from Asbury Park – Well, we were well-rehearsed. At that point, Bruce is a solo artist, Steel Mill had broken up, and there’s no (Dr.) Zoom band, there was no Bruce Springsteen Band. There was nothing. Bruce was being Bruce, and he auditioned for John Hammond. Then I get a phone call at the boatyard where I was working and it’s Bruce, and he goes, “You want to make a record?” “Yeah, let’s make a record”. So we went, we all got together, rehearsed in the Danelectro factory down in Point Pleasant. a few other little places, but that was one of the places that we rehearsed in for about a week, week and a half, learning the songs Bruce wanted to do on the record. Then when we went in to actually record at 914 all the basic tracks, all the basic tracks basically went down in one shot because we knew them, we knew how they went.  It was pretty quick because, like, it seemed like a week later, after we did the initial tracks and some vocals, the thing was out, and here we go. Now we’re on the road.
“Spirit In The Night”
On recording The Wild, The Innocent & The E Street Shuffle – The Wild, The Innocent, that took a little longer because we were out on the road. So we come home and we had three days off in between this trip and that trip and that’s where we go to the studio. So days off weren’t days off. They were in the studio and we were the graveyard shift most of the time after midnight when we started recording. We ended up, me and Clarence, I had a big tent, I was talking to Garry about my big tent just the other day as a matter of fact, if he lived on,…I forget the name of the street done in Neptune City where Gary lived, a good friend of mine, Charlie McCann lived across the street from him. In Charlie’s backyard, I put my big army tent up. We could all go hang out in the Army tent, like when we were kids, so I still have the tent. So what I did was when we started recording, had to be at 914 all these hours I put the tent in the back. It became the original Temple of Soul. Me & Clarence hung out there, nobody else wanted to really go in, that’s ok, me & Clarence were quite happy with nobody else.
“Wild Billy’s Circus Story”
On leaving the band after an argument with road manager Steve Appel – I was trying to protect the people that I work with, and I still do that right now with my guys. Not so much protection, just, you know  “Are you nuts? That’s not the way things are supposed to go”. A lot of what I was saying I learned from the people that have gone before me, like Chinnock taught me a lot about the music industry, the way they work it, publishing, stuff like that. And I’m like, “Oh, I wouldn’t do that. Because if you do that, then you don’t own your stuff,  Don’t, Don’t do that. Don’t. You can get a lawyer.”. But stuff like that went over people’s heads when I was saying it.
“The River” 2014 Hall of Fame Induction
On the E Street Band’s Hall of Fame Induction – I never expected it, but when I got the call from (Jon) Landau I said, “Oh, okay”. One thing that I did, I think looking back at it, it was something because they say, “Well, what do you want to do?” I said, “you put two drum sets up on the stage when we play, let me play with Max”. He went,  “Well, I don’t know”,  and then they did it.  They put two drum sets up there, and now we go to the soundcheck the morning of the thing, and there’s the two drum sets. So there’s one up a little higher than the other one, and the one up a little higher had Clarence’s sax and Danny’s accordion. So I get on the lower one and Max goes,  “Oh, no, no, no, no. You’re up there. You go on that one right then I went I’m in front, I’m right next to (David) Sancious, the horns are right behind me.  This is fun. Now, before we went out to do the soundcheck. I’m in the room talking to Max and I’m going, “Max, you’ve been with the band 40 years now, you play I know what to do behind you. Don’t worry about it. I’m just gonna Lay back.  Steve Van Zandt was standing there and goes, “Vini, what the fuck are you talking about?” “What you mean?” He says, “Look, you do all them licks when them licks come in them songs I want you doing them licks, you hear me?” I said, “Yeah, I hear you”. That’s what I did. It was terrific fun. It was tremendous fun.
Share. Facebook Twitter Tumblr Email