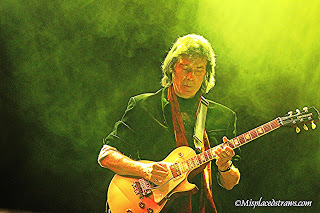 By Jeff GaudiosiJuly 20, 2020Updated:May 29, 2021No Comments6 Mins Read
Share
Facebook Twitter LinkedIn Pinterest Email
For decades fans have held out hope of a reunion of the classic 70’s Genesis lineup of Gabriel/Hackett/Collins/Banks/Rutherford.  While it doesn’t look like that will ever happen, the next best thing is Steve Hackett’s Genesis Revisited shows.  The Hall of Fame guitarist recently rereleased his legendary 2013 show at England’s Royal Albert Hall and took some time to talk about it.
Please press the PLAY icon below to hear the MisplacedStraws Conversation with Steve Hackett:
On the importance of the Royal Albert Hall – It is a place that we’ve seen so many great people, so many great performers. But it’s right across the arts, isn’t it? It’s rock, pop, country, classical, boxing matches, VE Day celebrations.  All sorts of stuff, from Vera Lynn, who just died recently at the age of 103, to Farewell Cream concerts which I saw way back, I think it was the 1960s.  All that history and you just know that every great performer has played there at some time or another. So there’s a lot of history when you walk on that stage you think, “Well, I better be good tonight, I better not be terrible.” 1:10

On the evolution of Genesis and Progressive Rock – Its ambitious music. A lot of this stuff that we now call “Progressive” wasn’t written with the progressive tag in mind. It’s just been classified that way because history sees it that way through to the lens looking backward into the days when the longer stuff was written, in the 1970s. In a year’s time, it’ll be 50 years since I joined Genesis and then left in the same decade, but after a number of albums. I guess there’s a legacy there. Genesis is a band that was interesting in all it’s incarnations, even from when it started out when they’re still virtually at school to the very last thing that the band did. A lot of people have been in and out of those doors, those hallowed portals, but the music is what survives past all of the various incarnations of the band. I like to think I’m keeping some of the legacy going. 3:48
“Dancing With The Moonlight Knight”
On working with former Genesis singer Ray Wilson and John Wetton on the record – Ray and I had already met and we talked. He’s guested with me a few times, he’s got a great voice. Very nice sweet guy and wonderful to work with him.  Wonderful to work with the late, great John Wetton, who was a very close friend of mine. We’ve known each other for years, I’ve known him ever since he was with King Crimson with Larks’ Tongues In Aspic. I’d just seen a show at a place about 30 miles outside of London in Guilford. Phil (Collins) was there, I was there, one of two of the Yes guys were there. We were all pals and we were watching Crimson and then I went to a club in London, a music business hang out way back in the day, and who should walk in but John Wetton who just joined that band. I said, “Oh, just saw you guys”, he said, “Was it okay?” I said, “Marvelous”, so he was seeking reassurance and it was very, very modest.  I was saying I thought it was great that he was with the band, he was obviously right for them. He was a mighty bass player and singer. He and I did many things together. 5:30
“Carpet Crawlers” feat. Ray Wilson
On creating Genesis Revisited and touring – I was very lucky. The album (Genesis Revisited II) had an extraordinary amount of special guests, most of whom were singers. It’s quite a pressure, I think, for anyone to follow either Peter Gabriel or Phil Collins. I was speaking to Steve Winwood at one point and I know that he felt intimidated at following them. I thought, “My God, here’s an extraordinary voice”.  I grew up listen to him and we were talking about that, and, of course, the pressure of that was extraordinary. So I thought the best thing is to have safety in numbers. Now I know that Nad Sylvan could have done a very good impression of either people. Phil has a similar voice and he has a chameleon-like quality and he’s even managed to sound like Richie Havens on some of the stuff but I did with him back in the day.  I guess that’s just the way it is. The album went gold and took off big time.  I thought, well  I could do some other stuff as well, but what if we just concentrate on doing a show of just the Genesis material? Bring that back for everybody. So I was doing for about three or four years nothing but Genesis stuff. No matter how my solo albums were doing, and I was releasing stuff and it and it was charting. Agents and promoters were saying, “We’d like a Genesis show”. So I got to the point where I was doing half and half. A set of my stuff then we would become the other band. The museum doors will be open fresh for those well-done exhibits. I love doing that, taking that back for people bringing that back again. I didn’t feel any sense of compromise about it. 8:00
“Supper’s Ready”
On the upcoming tour featuring Genesis’ Seconds Out – It’s rescheduled, basically. We’re at the point where there isn’t the degree of certainty that everyone would like in both our respective countries seems to me that the country’s that have done best are where PPE has been readily available or there’s been an insistence on people wearing face masks in public, especially on transport and places where they serve food and all of that. So certain countries are doing better than the UK or the States at this point, New Zealand being the top of the list. They locked down early, insisted on everyone wearing masks, and are reaping the benefit of that. There are thousands dying in my country and yours 11:58
“Firth of Fifth” feat. John Wetton
On whether he would join the reunited Collins/Banks/Rutherford Genesis –  No, no, no, no, no. We share the same agent so I had inklings that was going to happen but (my tour’s) already been on sale at the same time in the same area for about two or three months earlier. So I had my commitments and they obviously had theirs. It seems that neither of us will be able to fulfill everyone’s dreams, much less the dreams a lot of fans have, which is the idea that perhaps that team that existed between 1971 and ’75 that features myself and Peter Gabriel with the other three. The other three are, of course, augmented by others themselves. But it doesn’t look like that gonna happen. The short answer is no they didn’t get in touch and say, “Would you like to join us for that?”  I think you’d have to ask them about that.15:58
Follow Steve Hackett:
Facebook | Official | Twitter
Share. Facebook Twitter Tumblr Email