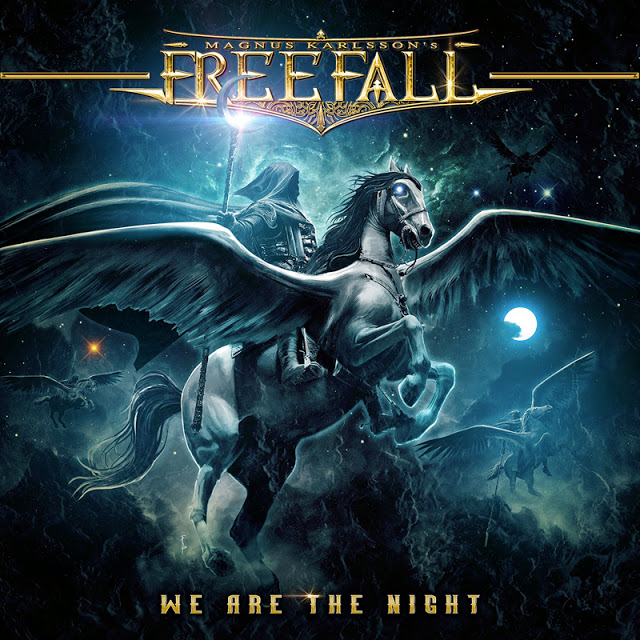 A Conversation With Guitarist Magnus Karlsson

By Jeff GaudiosiJune 8, 2020Updated:May 29, 2021No Comments5 Mins Read
Share
Facebook Twitter LinkedIn Pinterest Email
Magnus Karlsson is truly one of the great guitarists of the 21st Century.  His playing and songwriting can be heard on literally hundreds of albums that feature vocalists like Russell Allan (TSO, Adrenaline Mob), Jorn Lande (Masterplan, solo), Tony Harnell (TNT, Starbreaker), Michael Kiske (Helloween) and many more.  He is about to release the third record with his own band, Magnus Karlsson’s Free Fall, called We Are The Night, and took some time to talk about it and his career.
Please press the PLAY icon below to hear the MisplacedStraws Conversation with Magnus Karlsson:
On his writing process – (These songs) written for the Free Fall album. And there they are even written for the singers in mind. So I don’t write anything until I know who’s going to sing it, most of the time. So when, for example, Tony Martin was the first one I asked. When he said “Yes” then I started to write tracks and send it to him and he wrote lyrics and melodies on his songs. And so I don’t write a lot of songs that I save and just can use for different projects. I like to have an empty desk and start from scratch when I write something. To also keep it different, when I write, for example, Primal Fear, it’s not the same thing as Free Fall or Allen/Lande. 1:00

On matching the song to the singer – It’s different. A singer like Dino (Jelusic) and Nora (Louhimo), I listen a lot to them and I know the style and what they can do. But a guy like Renan Zonta, I never heard him sing my kind of music or the music I write. His own band. Electric Mob, sounds a bit different, but when I heard him, I really, really love the voice and I could imagine he will sound so great doing the melodic metal thing. But it’s always a risk in that...when I do the demos and I remember I had a bad throat so this demo really didn’t sound good. And I send it to him and he asked me, do I have to sing it with that kind of voice? And I said, “No, no, no, no!” 2:18
“Dreams & Scars” feat. Renan Zonta
On the possibility of ever doing a full record with Tony Martin – Yeah, I asked him and we talked about it. It didn’t happen yet and but maybe.  He didn’t say no, but, he really wants it to be the right songs. I already sent him some tracks and he had to think about it, He is a little picky, but that’s great because he’s also the only one on the Free Fall albums that write its own lyrics and melodies too. He said, “When you hire me, you don’t just hire a singer. You hire the whole thing with my approach to melodies and lyrics.” And I said, “Yes,, that’s fine”. 5:40
“Queen of Fire” feat, Noora Louhimo
On how he started writing for other artists – (Frontiers Records) asked me if I wanted to write for other artists, and then they started to talk about Jorn (Lande). But at the time, I think he was signed to another label and couldn’t do a solo album. Then we talked about doing a duet album and we had some names. I asked Russell (Allen) and he said, “Yes, but don’t write anything progressive”. He didn’t want to do another Symphony X. Frontiers told me that (I had) to write AOR music. I wasn’t really sure what that was, do you mean that I should write like Toto and Journey and that kind of stuff? That’s not really my thing. I’m more into (Judas) Priest and Iron Maiden and Dio. So I did my best. I think the first song was “Where Have the Angels Gone?” and Frontiers said, “Yes, this is perfect but we want more”. Then I continued and we started with this mix between metal and hard rock. I don’t know what you call it, but it’s not typical metal, I think. But maybe it’s hard rock with a metal attitude, metal sound. So yeah, that’s how it started. 7:45
“Hold Your Fire” feat. Dino Jelusick
On working with Primal Fear – I was a fan of the band and I remember I got an e-mail from Mat Sinner and I didn’t know them in person, so I was like “Who are you?. I just bought an album from them, I remember, Black Sun or something, and he emailed me because he asked me if I wanted to write songs with him for Ralf’s solo album and I said “Yes”. Then they asked, “Could you play in a German band?” That was because I just had my first kid so I couldn’t tour at the moment. But then I said “Yes”, and then I joined the band. I’m still in the band, but I don’t tour with the band. I don’t play live because it’s hard sometimes to tour really a lot. I can’t leave my family that long. It’s a lifestyle and I prefer to be around my home. 10:40
“Love’s Dying Wish” Starbreaker ft. Magnus Karlsson & Tony Harnell
On his dream vocalists to work with – Yeah. I mean that there is a couple of new ones I’m checking out but, of course, (Rob) Halford would be really, really cool and maybe (David) Coverdale. But they don’t really have the voice they did in the 80s either. So I don’t know if it would be a good idea.  And also, I connect their voices with their band. I hear Halford and I want to hear a Judas Priest song. So maybe it’s not a good idea, but I wouldn’t say no if he asked. 14:53
Follow Magnus Karlsson:
Facebook | Official | Insta
Share. Facebook Twitter Tumblr Email