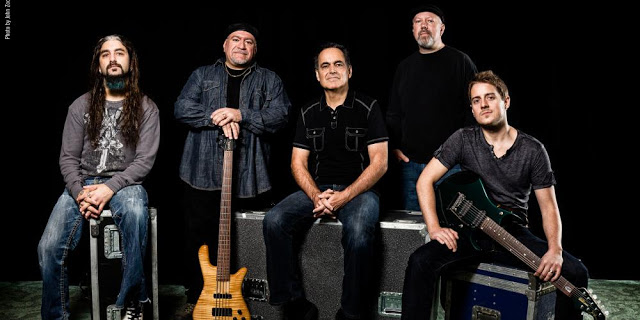 By Jeff GaudiosiMarch 5, 2020Updated:May 29, 2021No Comments7 Mins Read
Share
Facebook Twitter LinkedIn Pinterest Email
Neal Morse is a leader in the modern progressive rock movement.  Together with his band, featuring Mike Portnoy, Randy George, Bill Hubauer and Eric Gillette. they have released two unquestionable classics, 2016’s The Similitude of a Dream and 2018’s The Great Adventure.  As the band is about to release a live record called The Great Adventour – Live in Brno 2019 guitarist Eric Gillette took some time to talk about what it takes to bring such a production on the road, the live record itself, and so much more.
Please press PLAY below to hear the MisplacedStraws.com Conversation with Eric Gillette:
On transferring the studio creation to the stage: I’d say we’re kind of old school in the sense that we don’t use any track or click track or backing tracks or anything of that nature. So everything you hear is literally coming from all of us onstage. Basically Bill (Hubauer) and Neal (Morse) I would say have the hardest time doing that. As a guitar player there’s only so much I can do, but in the land of keyboards you can you can do so much more with layering and cuing a sample. I know there’s lots of talks we have regarding splitting up guitar parts, sometimes I’ll play something I didn’t even play on the record sometimes to cover a part so that Neal can either play a key line or he can get to his guitar to put it on because he’s been roaming around stage. There’s lots of factors. But I would say probably Neal and Bill have their work cut out for them and they have a lot more to talk about and figure out who’s gonna play what part.  I’m always amazed, Bill always comes up with some crazy unique way of  doing stuff. If you’ve ever been to show you’ve seen probably him covering so many parts in and probably wondering where it’s all coming from but it’s it’s definitely coming from him. 1:10

On being part of such a talented band – I would say no matter where you’re at if you’re a musician, wherever you’re at in your your journey through being a musician, that if you can surround yourself with people that are  better than you  or just people that push you, that it’ll only make you better. For me personally it’s like you get a room with people like that and you know you don’t want to be the weak link so you’re you’re either forced to get better or you are that weak link. I don’t think anyone wants to be that. 4:20 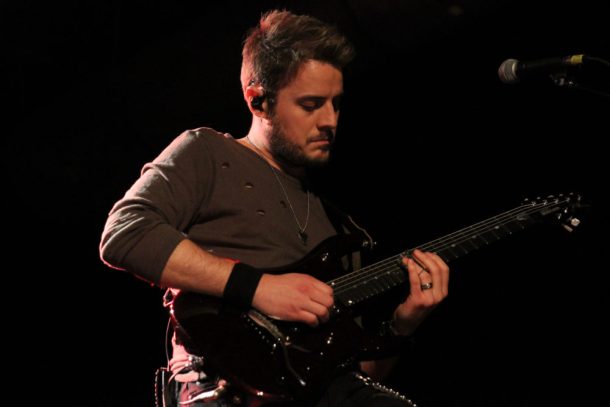 On how he first hooked up with Neal – Thanks to the internet really. I’ve been a fan of  Mike (Portnoy) and kind of heard about Neal through Mike. I think it was on Mike’s forum back in the day and I think I saw that he was playing on a  live, I had missed the the actual studio album, but I saw he was playing on Testimony live and so I think I ask for it Christmas from my parents as a gift. I mean I’m still probably only like maybe 16 years old or something, I don’t know I have to do the math. So  I got that and watch it and it was just from then on I was a fan.  I got to the point where I hadn’t really listened much because I kind of went the the other rout in my music career. Where I was at there wasn’t a big progressive rock scene so I was playing in some country groups and just whatever gigs I could get.  I kind of wasn’t super  really following the progressive world as much, but I just so happened to stumble across Neal posting that he was holding up open auditions for his solo group, or he’s trying to put together a solo group to play his solo music. So I just submitted some videos online and heard that and got invited to in person audition in Nashville and got the gig. We toured and played some if his solo music as that entity and things just kind of progressed and changed and evolved and we just all had such a good chemistry playing together and we decided to actually make it a band and get together in a room and write and and the rest is history. 5:29
“Welcome To The World”
On the writing process for a NMB record –I would say the lyrics are the last thing and that’s been kind of Neal’s main domain with the lyrics. Musically we all contribute evenly. It’s an interesting process because sometimes we come in with little nuggets of an idea or a riff or melody or something and we try to spawn something from that. It’s weird to go to a writing session and not really bring much with you already. It’s a weird feeling but I’ve come to not mind that feeling because when we get in a room there so much that comes out organically of just somebody plays, we’ll just be jamming or someone will start to play a riff or sing a melody and then everyone just kind of starts contributing and it starts to form  some sort of piece. The lyrics tend to come last. Specifically, what we kind of had done was that we  knew we were going to continue the story, or at least that’s what it looked like, so  I would say we kind of approach it as an out an outline of this is kind of what’s gonna be happening here as far as  the story line because you want your music to to match that. It wouldn’t make sense to have “Dark Melody” be some super happy piece like “The Ways of a Fool” so we kept that sort of stuff in mind but as far as really specific lyrics, that that tends to come to pretty close to the end. 10:15
“Fighting With Destiny”
On creating accessible prog – I think it’s the musical maturity thing where, obviously, these guys have been doing this  a long time, I am the younger one but I think there’s a musical maturity to it. At some point it doesn’t really matter how how many notes or how fast you could play. Technique and things are great but if that’s if that’s all your music is, to me it becomes stagnant. You need a song, a melody, some heart behind it.  Neal and Mike, all the guys are that way where it’s never really we sit down and we’re like “Okay let’s write this riff in 7”,  it’s just like someone play’s something and then that’s what it is. It’s never like let’s sit down and write the most complex time signatures and then figure out how to make that musical. It always comes from a musical place first and sometimes that’s just how our brains work, that it is slightly complex. 15:45
“Dark Melody”
On what’s next for NMB – I don’t know/ I know we’re gonna get together and write. We tend to not overly discuss things because you start putting this preconceived things on getting together. It’s probably going to be just like last time where we get together and, we didn’t know we were going to do a sequel when we met in Nashville, we went there to write a new record and that’s just kind of what ended up happening. I would say there’s no plans to do a third follow up but  I think it’s just we’re going to get together and write in and what comes out is come out and I’m sure it’ll be good. After the past 2  you can either look at it as “Crap what are we going to do” or you can look at it with the excitement like”I can’t believe the last 2 massive albums we did”,  that massive amount of music and and how great it turned out. It just makes me excited to get together right I’m not I’m not super concerned with what will come up with. 17:40
Follow Eric and The Neal Morse Band:
Facebook | Official | Twitter
Share. Facebook Twitter Tumblr Email