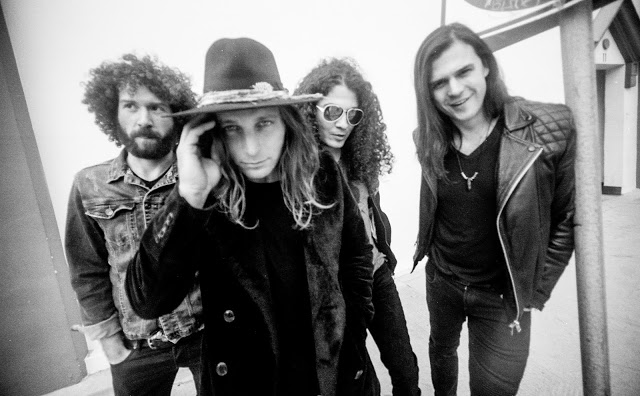 By Jeff GaudiosiFebruary 13, 2020Updated:May 29, 2021No Comments4 Mins Read
Share
Facebook Twitter LinkedIn Pinterest Email
Rock is far from dead.  There are plenty of new, young bands ready to step up and take over where their heroes left off.  One of the best of this new crop of bands is Los Angeles’ Dirty Honey.  As they sell out venues across the country, guitarist John Notto took some time to talk about the band, its music and touring.
Please press PLAY below to hear the MisplacedStraws.com Conversation With John Notto.
On the current tour – The tour’s going great, it’s absolutely a blast! I think we’ve sold out nearly every show. .53

On whether or not the band feels more pressure headlining a show rather than opening – I feel less (pressure) actually. The fans are there for our music, they’re our fans. So when we get on the response is a little more alive, they’re right there with us on the first note. A lot of time when you’re opening, which was most of the time in the beginning of our career, you’re playing for people who haven’t heard your music, so you have to win them over. 1:39
“When I’m Gone”
On how Dirty Honey came together – I met Marc (Labelle, vocals) through a friend who was playing drums with him at the time. I just came down and sat in on one of his gigs and he really liked my vibe, he liked my rock n’ roll style, most importantly he liked my playing. I joined with him and we bummed around doing cover gigs for awhile and we started to write songs.  I brought in Justin (Smolian, bass) to replace the bass player that was there. It started to snowball a little more with writing songs and Justin brought in Corey (Coverstone, drums). When that happened, that’s when we named it Dirty Honey. 2:50
“Rollin’ 7s”
On turning down label offers and remaining unsigned – None of the offers were good enough. A lot of the major labels passed. It was just like, “Well, we’ll keep going this way.” 5:45
On going to Australia to record with producer Nick DiDia –  We reached out to a few producers and we just had a connection with him, he was one of the producers that we had a good connection to.  There were a few producers we reached out to. We talked to one of the producers that had done the first Greta (Van Fleet) EP, it just seemed like similar waters to be swimming in.  I think even the Foo Fighters’ drummer reached out to us at one point, that was short-lived.  That never really came to anything, we never met him actually. We had a good connect with Nick.  After talking to him, he really believed in the band.  He offered for us to take the record and then use that to get the money to pay him with. With that cost not being upfront like it would be with any major studio in Los Angeles, it actually made it more favorable to fly to Australia. 8:00
“Break You”
On the possibility of signing with a label – A label is going to put their hands into every revenue stream and, also, that’s more cooks in the kitchen. It’s very fearful idea for me to imagine being on a label and them losing faith with you. It could kind of put your career to sleep. It would have to be a very large record deal and we would already have to be so well off that it would  be an undisputed, necessary instrument to take us from a national power to global. 10:40
“Last Child”
On their cover of Aerosmith’s “Last Child” – That came about by opening up for Slash and I really wanted to do that song. I looked up that Slash’s favorite record was Rocks and somewhere in there it said he really loved the song “Last Child” and I liked that he never covered it. When we were opening for him we wanted to kiss the ring a little and we were throwing around ideas.  11:49