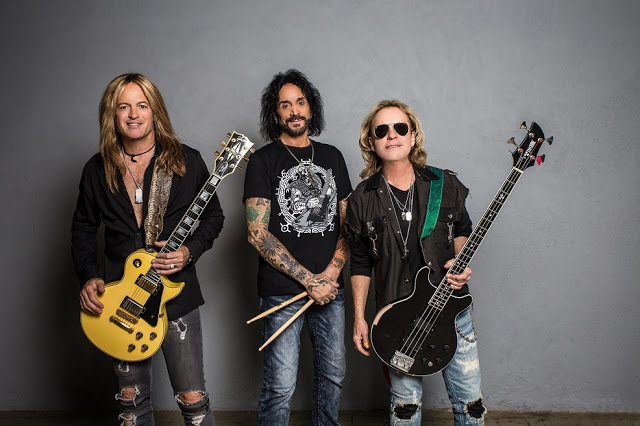 By Jeff GaudiosiJanuary 13, 2020Updated:May 29, 2021No Comments6 Mins Read
Share
Facebook Twitter LinkedIn Pinterest Email
We are in a time when most musicians have side projects in addition to their main band, unfortunately, most of those projects are short-lived.  That certainly isn’t the case with Revolution Saints.  Made up of vocalist and drummer Deen Castronovo (Dead Daisies, ex-Journey), bassist Jack Blades (Night Ranger) and guitar player Doug Aldrich (Dead Daisies, Burning Rain, ex-Whitesnake, ex-Dio) Revolution Saints is about to release their third record Rise.  Doug Aldrich took some time to talk to me about the band and their new record.
Please press PLAY below to listen to the MisplacedStraws.com Conversation with Doug Aldrich:
On how Revolution Saints got together – Well we have been friends from touring together. Jack and Deen had known each other a long, long time from the Bay Area, I believe and I met Deen  I guess about  12 years ago when I was in Whitesnake, we toured together with Journey a lot and Deen and   I just hit it off. He’s such a great guy and we got along really well as musicians and friends, and then also Night Ranger and Whitesnake did some shows and I met Jack but  I didn’t get to know Jack. Deen has been known to have an amazing voice and so the record company offered him a solo deal and they asked who would you get to be on the record and he picked me and  Jack and once he made that decision the record company kind of decided “well, why don’t we do this for you, we’ll put this band together for you Deen”, and that’s how it happened. 1:00

On Revolution Saints status as a “Band”- It really is a project, It’s not so much a band.   I want to be clear with the fans. I was uncomfortable doing the second record because we hadn’t done any shows and we weren’t a  real touring thing but then some of the fans said “We don’t care,  we just like the music”. So and we that’s kind of why we’ve gone ahead and done more so it’s just to give people some music and something throwback to the eighties. 3:45
“Closer”
On working with producer/writer/keyboardist Alessandro Del Vecchio – He’s great, he’s really a great person, great soul, very talented and he works really hard. He does a lot of records for Frontiers. I think Revolution Saints is something that he really takes to and puts under his wing because it’s members of bands that he kind of grew up listening to and he’s super into it. If it wasn’t for him it probably wouldn’t have happened in the first place because Frontiers said “We want this” and Alessandro was one to carry it out, made sure everyone got it together and made it easy. 7:18
On how the band records – This time it was a digital thing being sent around the world. Deen and I were on a break from the Dead Daisies, which is our main band. I think he went over to Europe for something and then he ended up recording the drums against some demo guitars and stuff and then I was doing an acoustic tour to promote the Burning Rain record so I wasn’t available at that time.  Then they sent me the tracks I did my guitars in my home studio and then Alessandro mixed it and Jack did his up in Oregon. So yeah, this time was basically all separate but we got together to do a couple of videos.  The last record we were together in Italy recording, which is nice. 9:40
“When The Heartache Has Gone”
On his solo in “When The Heartache Has Gone” – I actually didn’t think about it that much.  I put that solo down I thought “that sounds pretty cool”. I mean the majority of that solo was from one take that I did and I fixed a couple spots that I didn’t nail what I wanted to do.   I thought “hey that’s pretty cool” and it came out really easily, I didn’t have to work so hard at it. There are some solos that I really, I get my mind like a melody and then I start to go that direction I decide no, that’s not the best melody I’m gonna try something and it’ll haunt me, which is the best way to go?  But with the solo like that one, it’s just basically a little more bringing fire and I didn’t think about too much. 11:00
On the possibility of Revolution Saints playing live –  I don’t think so, you never know, you never say never but I don’t think so.  Here’s the reality of it, we all have different things going on and, for example, Night Ranger is a band it’s probably got, aside from the band members, probably another 50 people where that’s their job. So if Jack is gonna take off and do Revolution Saints that’s not going to go over well with the people that rely on that income and that’s just the honest truth about it. Deen and  I are really tied up with promoting Dead Daisies, that’s what we want to do so it’s nice to have something like Revolution Saints that we can do for fun and we can do for the fans.  It’s probably not possible to do a proper tour because of those reasons I said, at that at the same time I would totally be open to doing something for charity. The way things are right now the thing that comes to mind is Australia and the forest fires so if there was an opportunity and I can say those guys “Hey let’s do this as a fundraiser, let’s do a small little set” that might be possible to do but that’s about it. 13:20
On the Dead Daisies – We’re kicking off full-steam in March with rehearsals. Basically, our motto is to Rock The Planet. We’re really excited about the record.  Glenn (Hughes) is a legend, it’s a really great mix. 15:30