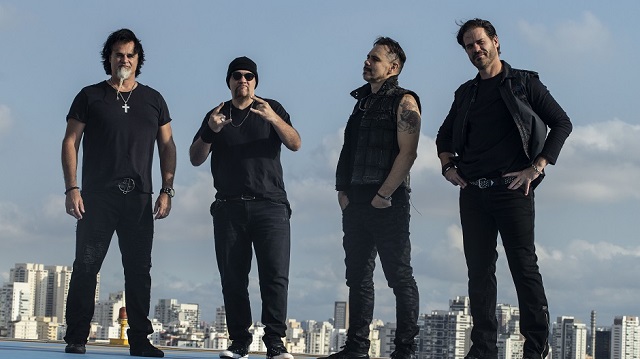 By Jeff GaudiosiDecember 6, 2019Updated:May 29, 2021No Comments3 Mins Read
Share
Facebook Twitter LinkedIn Pinterest Email
Hard rock and metal music may not be on the top of the charts like it once was, but that doesn’t mean you can’t find it, it just means that sometimes you have to search.  In the case of Doctor Pheabes, that search will take you to Sao Paulo, Brazil.  In their native Brazil, the band has played the biggest rock festivals (Monsters of Rock, Rock In Rio, Lollapalooza) and opened for giants like Guns N’ Roses, The Rolling Stones and Black Sabbath.  Doctor Pheabes recently released Army of the Sun and are gearing up to take on America and the rest of the world in 2020.  I had the opportunity to talk with drummer Paul Ressio about the making of the record and what comes next for the band.
The title track, “Army of the Sun” leads off the record and immediately grabs you.  Big drums, driving guitar riff, gang chorus, it’s clear the band is showing it’s Sunset Strip influence.  Ressio mentions that this is the first Doctor Pheabes record where the band used U.S. based producers and it shows in the accessibility of the music, which Ressio calls just a “straight up rock and roll band”.

The production team of Brazilian native (and We Are Harlot drummer) Bruno Agra and the late Kato Khandwala are the true stars of the record.  Production-wise they really brought out the best in this talented band.  It’s a heavy, melodic but thoroughly modern sound.  In addition to their production talents, Ressio also talks about the input that both men had into the songwriting process.
“Army of the Sun”
Army of the Sun is also a well-rounded record.    There are the anthems that immediately stand out, such as the title track, “Rebel Riders” and “Your Love Is Mine”, ballads like the gorgeous “Ask of You” “Here To Stay” and “Live Forever” and the mid-tempo tracks like “Better Off Alone” and “Find A Way” that propel the record forward.
“Here To Stay”
Their hard work has paid off as the video for “Rebel Rider” recently surpassed one million YouTube views.  Ressio says how the success of the video is beyond anything the band could have imagined.  That success is also opening up markets outside of their native Brazil.  Doctor Pheabes did a brief run of California shows when the record was released which marked it’s first U.S. shows ever.  The band was well received and is planning a bigger U.S. run in 2020 with the possibility of some European shows and festivals also on the table.
“Rebel Riders”
While the band is still riding Army of the Sun and releasing new videos they are also working again with Agra (Khandwala lost his life in a motorcycle accident in 2018) to prepare their next release.  Ressio says the band hopes to have it out sometime in the fall of 2020.    If you’re looking for modern, guitar driven rock with an 80’s Sunset Strip feel to it check out Doctor Pheabes, you’ll definitely be hearing more from them in 2020!