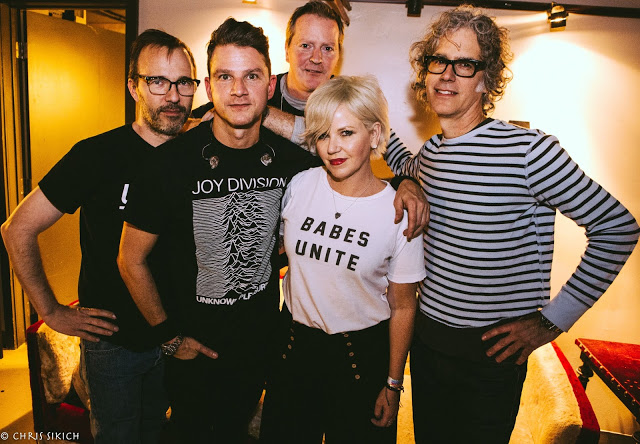 A Conversation With Letters To Cleo Guitarist Michael Eisenstein

Letters To Cleo came out of the Boston, MA scene in the early 90’s with a string of hit singles and songs on some of the most iconic soundtracks of the era.  The band split up in 2000 and after a small tour in 2008, returned to recording and touring in 2016.  They just released a Christmas Ep called OK Christmas that’s made up of 3 covers and one original track.  Guitarist Michael Eisenstein took some time while on tour to talk about this record and what’s next for the band.

Please press PLAY below for the MisplacedStraws.com conversation with Michael Eisensten:

On what led the band to record a Christmas Ep – Well the plan was to follow (Back To Nebraska) up with the an  LP of original music…we’re actually back together part time, we all have other full time things that we do, be it in music or other. So we we have limited time when we could get together and  work. The song writing schedule for the LP just kind of fell behind enough that we were not going to get it out and 2019.  We were like “We’d would love to release something in conjunction with our November tour.” and Stacy Jones, our drummer,  was like “We can always do some Christmas music”. :53

On how they chose songs – I think  3 of the 4 of us right away brought up “Father Christmas” so that was kind of on the list. It’s  similar to the kind of songs that we do,  it’s right in our sound so that was an easy one to go for. Outside of that we took suggestions and then I set a Spotify playlist. I just  started adding to it and we were trying to pick the ones that not everybody knew and we’ve sort of narrow it down from there. 3:03

On changing the “machine gun” lyric from “Father Christmas” – We had recorded the entire song, there was a  finished vocal on there, and that following weekend in late July were shootings in Dayton, Ohio and El Paso, Texas. Like everybody else we follow the news and the the extensive coverage of it, yet another shooting tragedy.  Greg McKenna (guitarist) kind of brought up that it feels kind of weird  putting out this.  There’s a lyric in the song about  asking Santa for a machine gun to scare all the kids in the street, and Greg was like it doesn’t feel right putting that lyric out at this time. Kay (Hanley, vocals) took to Twitter, we all agreed that was a problem,  and asked The Kinks personally  “is it okay if we change that lyric” and she never heard back. She has a vast Twitter following and they they all chimed in with suggestions and it was one of her followers had a kind of a rough idea of what we went with, which was “can you melt down all the machine guns so the kids are safe in the street”. 4:58

“Father Christmas”
We’re still acknowledging the sentiment of the song about Christmas being a different experience for people of different economic background, just trying to be sensitive that we have a real problem with guns and we don’t want to joke about a kid having machine gun scaring everyone else in the street. 9:35
“Miss You This Christmas”
On getting out a new, full-length, record – We definitely should be able to get that out in 2020. We’re trying to do  this one the old-fashioned way. With the last 2 Ep’s  I produce them and we just kind of like gone in  with the “L. A. 3” and recorded and sent the track to Boston and have them do their parts and send it back, kind of cull it all together.  We’re trying to do this next one the old-fashioned way. Have an actual outside producer, be all in the same room, set aside like a month to work on it, or however long it takes. It’s a little bit more difficult the scheduling and the logistics of it but that is definitely our goal for 2020 to have that out. 10:20
“If I Get Home On Christmas Day”
On streaming – It’s one of the great miracles of modern technology. The deal that kind of was cut between the major labels and the technology companies didn’t really take musicians trying to make a living into consideration. So it’s not the best deal. We’re all kind of forced to be stuck with that deal now.  If anyone out there cares, Apple Music does better by the songwriters and musicians than Spotify,the 2 major ones, I’m not sure where by the other ones fit into that, but  I know Apple Music is the most artist friendly  if you’re choosing one. 13:40
“X’mas Time (Sure Don’t Feel Like It)”
On 2020 touring plans – We have  a tour booked with some other great bands that’s going to happen but, unfortunately, I can’t announce it yet, the contracts are not signed. We will be on tour in 2020 for several weeks as part of a package tour so it’s going to be killer. 16:18