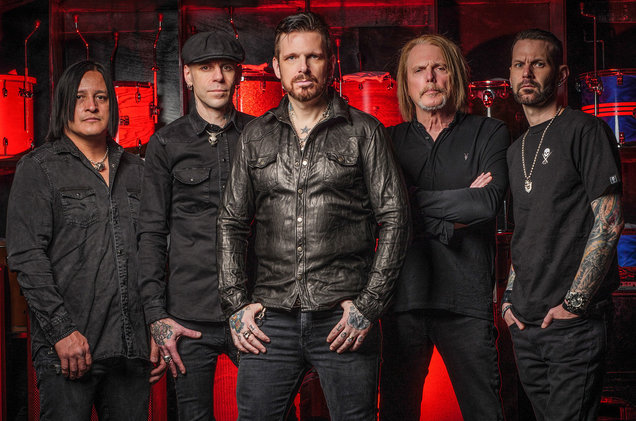 By Jeff GaudiosiOctober 9, 2019Updated:May 29, 2021No Comments6 Mins Read
Share
Facebook Twitter LinkedIn Pinterest Email
Scott Gorham is a true rock n’ roll survivor and one of the nicest guys in the business.  He joined Thin Lizzy in 1974 as they were about to release the Nightlife record and was a mainstay on guitar until the band imploded in 1983.  After spending time working with other artists, Scott reformed Thin Lizzy and eventually evolved into the incredible Black Star Riders.  Scott and the band just released their fourth record Another State of Grace and he took some time to talk about it as well as his time with Thin Lizzy.
Please press PLAY to hear the MisplacedStraws.com Conversation with Scott Gorham:
On dealing with lineup changes for this record – It seems like t it changed a lot and then not at all. What I mean by that is  the quality of the recording and all that has stayed the same so that’s great. There’s been no hitch at all getting couple of new guys in the band and that’s  really down to the to the quality of just how good  Christian (Martucci, guitar) is and how good Chad Szeliga on drums is.  I would say the change really is a little bit in  sound and production. We’ve got a new producer, his name is Jay Ruston and we recorded in LA rather than Tennessee this time. So I think the atmosphere was a a lot lighter, we had a great time in the studio, writing this album seemed to be extremely easy, everybody jumped on board so you know everybody got to show their chops in there.  I think also with the difference in guitar sound between myself and Christian is  different than it was with (former guitarist) Damon (Johnson) so I think what’s really happened is there is a much wider sound to this album than there has been on the  3 albums.  2:06

On the new song “Why Do You Love Your Guns” – Well obviously it would resonate a lot more over here (Europe) because of the gun laws and  the population in every country over here doesn’t feel the need to own the hardware and have it at home.  I don’t really look at us as any kind of a political band trying to shove any of our beliefs down anybody’s throat. This  all kind of came about for a couple reasons. A little over a year ago we were going out to do one of the rock cruises and we landed in Miami and just that day there was a mass school shooting and you could really feel the tension in the air just in the reception room of the of the hotel, people  whispering away and  you could tell people were were frightened. Ricky (Warwick, vocals) and I’ve been touring for so long you keep hearing more and more more about all these mass shootings in America and  you talk about it, voice your concerns about all that. With Ricky growing up in Belfast it in the seventies  he was right there in the middle of the Irish Troubles.  He saw the gun troubles, problems that were happening  in Dublin. So that’s good it’s almost kind of a D. N. A. thing, if you if you will, for him and I think that was an easy song for for him to write. 7:57
“Another State of Grace”
On not recording under the Thin Lizzy name – Management, everybody in that sort of higher echelon area, everybody wants an easy sell.To record under a brand name that everybody knows about, for them, would be very easy, the money’s really good but I just could not bring myself to do it. As we came closer and closer to the “make your mind up time”  I pretty much knew way before anybody else at this was not going to happen. I mean you gotta remember, every record I did with Thin Lizzy was with Phil Lynott sitting right in the middle there and he and I recorded all of those albums. So the thought of me taking the name and writing new songs and going on doing this career with Thin Lizzy without Phil it just  wasn’t on. I was just not going to go there.  I brought that up to everybody and, to be quite honest, I think there  was kind of relief there because nobody wanted to compete with the  Lizzy albums. I think Ricky felt a little odd, he  figured everybody thought that he was going to try to take Phil’s place, which was never  the case at all. To me it was just the only thing to do, not only the right thing but it was the only thing to do. 11:19
“Tonight The Moonlight Let Me Down”
On the ongoing legacy of Thin Lizzy – When we first broke up in 1983 I had a discussion with my wife  saying “well you know that’s kind of the end of that”. The whole band thing, the money thing, it’s kind of done, in 5 years time nobody’s going to really remember who we were, probably, not really  or some DJ will bring an old record out and blow the dust off , play a track and then you wouldn’t hear of us for 5 years. But that actually never happens disc jockeys, radio stations, commercials, movies  they kept playing the songs, kept the name alive and all that so that was really, really gratifying to hear and see all that happened so yeah pretty cool. 13:30
“Ain’t The End Of The World”
On the difference between touring Europe and America – In Europe we definitely would be the headline spots. We are  a big enough band to actually do those kind of shows,  festivals, theaters and all that. In America obviously not.   I think the best way to go is to be able to jump on  a bigger band in America, jump on their bandwagon, grab on to their coat tails for a couple of months and have them drag us  around of America with them. You want to play to as big an audience as you possibly can at any one time rather than dribs and drabs. The clubs in America great,  they’re fun to play, but I think the  easier quicker way to do it is to just jump on a bigger tour, so well see if anybody wants to have us along for the ride. 17:00