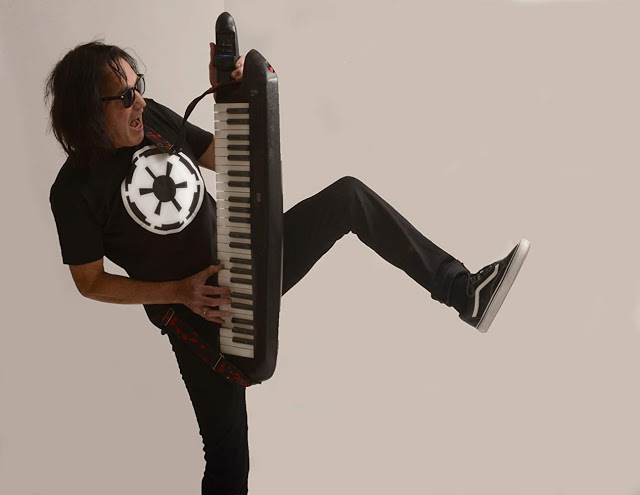 A Conversation with Keyboardist Mark Mangold of American Tears

By Jeff GaudiosiSeptember 14, 2019Updated:May 29, 2021No Comments3 Mins Read
Share
Facebook Twitter LinkedIn Pinterest Email
In the early to mid 1970’s British keyboard players ruled the rock world.  From Keith Emerson to Rick Wakeman to John Lord, keys ruled the day.  American Tears, from Long Island, NY, and their keyboard virtuoso Mark Mangold, was the American response providing over-the-top keyboard heroics with a rock sensibility.  Now Mark and American Tears are back with a great new record, White Flags, and he took some time while in Stockholm, Sweden, to talk about his career and the new music.
Please press Play below for the MisplacedStraws.com Conversation with Mark Mangold:
On the beginnings of American Tears – We were really exploring at lot of the keyboards and synths that were being invented at the time.  We started with the Hammond organ, which was popular, and then synths were invented and something called a Mellotron, which was a keyboard that actually had tapes that were  recordings of whatever it was, meaning an orchestra with a string section, it had some good sounds.  We would buy one and try using it in the tapestries we were trying to create.  American Tears was about having a signature sound. 1:00

On American Tears changing their sound and becoming Touch – For years I was standing in front of twelve keyboards, the only singer in the band and I needed some company.  We asked to have a guitar available on certain things and I think just the pendulum swung and we added Craig Brooks on guitar and on the next record we actually morphed into a band called Touch. 3:40
“Pitch Black”
On returning American Tears to it’s keyboard sound for White Flags – I must say, over the last couple years I really long for that freedom of just playing keyboards and getting away from formula and just trying to be creative without the constraints of what “popular” is, whatever “formula” is, whatever you’re supposed to do.  It’s really just opening yourself more to instinct. 5:17
On the music scene of the 70’s – There were years where things got very generic and American Tears was a rebellion against that generic, whether it be rock or pop. 7:20
On the music scene in Europe verses America – This kind of music, and I think rock in general, is way more popular here than it is in the States.  There’s huge festivals here, a lot of bands that were not huge but popular in the 80’s are still very much alive and touring.  The environment here for this type of music is wider. 9:40
“Fire Down Below”
On the song “White Flags” – It’s about surrender, it’s about accepting yourself and surrendering to yourself. What are we fight for? What’s really going on? It’s about peace and resolution, surrendering to each other and making peace because we are all being manipulated in a way…once you accept yourself and other people, it’s not so scary.  12:40
“White Flags”
On the lyrical content of the record – The goal is to transfer emotion.   There’s definitely some anger in this record lyrically, but it does go between anger and peace and resolution and promise.  If I didn’t do this record I don’t know what I would do in terms of getting that anger out of me. 14:35
On the prospect of touring – That’s the goal.  We put together a band, we want to do a video then we want to reach out to festivals and things like that, especially in Europe. 20:00
Share. Facebook Twitter Tumblr Email