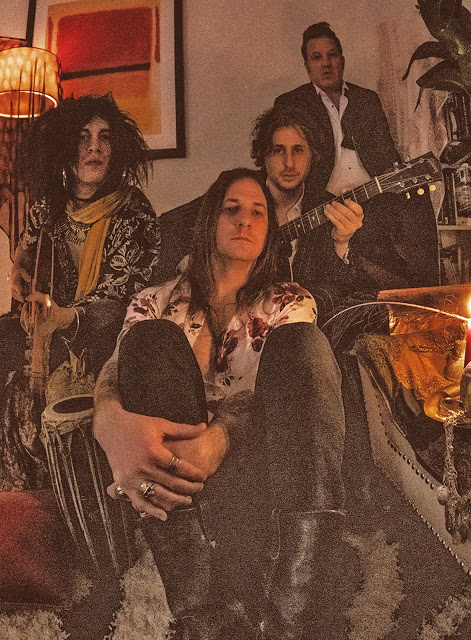 By Jeff GaudiosiMay 2, 2019Updated:May 29, 2021No Comments3 Mins Read
Share
Facebook Twitter LinkedIn Pinterest Email
If you long for the days when rock music had a swagger to it, the days of Exile on Main St., the days of the New York Dolls, then The Sweet Things are for you.  They are about to emerge from NYC with an amazing record that combines everything you love about the Stones, the Dolls, Hanoi Rocks, the Quireboys, the Georgia Satellites and the Ju Ju Hounds and turns it into a thoroughly modern rock n’ roll sound that you didn’t realize you needed.

The Sweet Things are made up of Dave Tierney, lead vocals/rhythm guitar; Lorne Behrman, lead guitar/vocals; Sam Hariss, bass/vocals; and Darren Fried, drums/vocals and have been on the New York city scene for about four years.  Their full-length debut, In Borrowed Shoes, On Borrowed Time, comes out on May 24th.  I recently had the chance to talk with bassist/vocalist Sam Hariss about the record, the band, Don Rickles, Jesse Malin and all things rock n’ roll.
Press Play for my conversation with Sam Hariss
While In Borrowed Shoes is without a doubt a rock record, Hariss is quick to point out that the band didn’t want to be pigeon-holed as just a Dolls knockoff.  He says the band really flexes its other muscles by including some Southern rock elements as well as elements of the Stones, the Faces, and even girl group influences if  you dig deep enough.

For a relatively new band, The Sweet Things have no shortage of famous friends that show up to help on the record.  The legendary Uptown Horns, who have played with everyone from the Stones to James Brown, make a few appearances on tracks like the explosive opener “Liquor Lightning” and the boogie of “Drained”, Brian Hurd of Daddy Long Legs lends his harmonica skills to “Dead or Worse”, Rob Clores’ (Jessie Malin, Colin Hay) keyboards are all over, particularly on the driving “Fix To Kick” and Texas icon Alejandro Escovedo turns in a stirring vocal on the album’s closer, the Izzy Stradlin and the Ju Ju Hounds-flavored “Feed My Dog”.
The Sweet Things come across truly as a band.  There’s no one main songwriter or vocalist, each member figures prominently on the record which creates a varied but still distinctive sound.  When it comes to choosing a vocalist for each track, Hariss points out that whoever brings in the song has final say on who sings it, but ultimately it’s what works best for the song.
At 10 ferocious tracks, the record plays like a quick strike that leaves you wanting more.  One of the best things I could say about In Borrowed Shoes, On Borrowed Time is that as each song ends you find yourself singing the chorus in your head.  The overall feel of the record is similar to Appetite for Destruction or Exile on Main St. in that at first blush it may come off as a raw, sloppy rawk record but the deeper you dig, the more you listen, you discover layers and a musicianship that proves, much like their influences, it takes a lot of talent to sound that raw.
The record comes out May 24 and The Sweet Things will hit the road In the UK in June, hopefully playing some US shows in the late summer.  If you’re looking for the perfect record to turn up loud on a hot summer day, In Borrowed Shoes, On Borrowed Time is the one for you.
Follow The Sweet Things:
Facebook | Instagram | Official
Share. Facebook Twitter Tumblr Email

New Music Showcase: Lorne Behrman, When I Hit The Floor