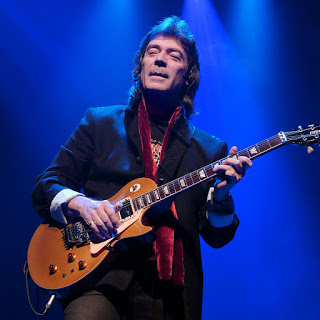 By Jeff GaudiosiApril 8, 2019Updated:May 29, 2021No Comments4 Mins Read
Share
Facebook Twitter LinkedIn Pinterest Email
Most musicians dream of the resume Steve Hackett possesses…a Hall of Fame inductee from his groundbreaking work in Genesis, inventor of guitar techniques that influenced Eddie Van Halen and Yngwie Malmsteen, a solo artist who just released his 25th record, At The Edge of Light, and is about to embark on a massive world tour.  This tour will see him play not only selections from his new record, but also the classic lps Selling England by the Pound from Genesis and his solo masterpiece Spectral Mornings.
Please press Play below to listen to the MisplacedStraws Conversation with Steve Hackett.
On collaborating in the studio – I’d like to think that everyone who arrives on the record adds something of their own, a certain amount can be scripted but a certain amount is left to the world of the spontaneous. I like surprises and I encourage people not to just play or sing the ideas I come up with but add ideas of their own as well. 2:00
On his upcoming tour – I had the idea to do Selling England by the Pound…and it just fit with the 40th anniversary of Spectral Mornings. 7:40
I thought “why don’t we have two favorites” and delve back into the Genesis stuff and do the whole Selling England by the Pound and also include the missing track that Peter Gabriel started many years ago that I finished off in the mid 90’s with his blessing. The track “Deja Vu” is in there so I think of it as the complete Selling England by the Pound. 8:20
With Spectral Mornings, I feel like something special happened on that. So I was looking for a collection of miraculously magical albums  and every now and again that happens if you’re lucky. 10:10
On the reception of At The Edge of Light – It’s a personal favorite that happens to have done very well. I’ve never really had an album that people have responded to quite a positively as this. 10:30

On developing the tapping and sweep picking techniques on Selling England –  (“Dancing with the Moonlit Knight”) is a track that has lots and lots of surprises and there are also improvised moments on it…I thought I better do a very inventive solo on this if I’m going to lead the charge so it featured tapping, sweep picking and octave jumps. And those three things, separate techniques had not actually been named, I was just doing them all instinctively. I guess it was like jumping in a time machine and going into the future as these things would become the mainstay or the techniques of many heavy metal shredders who were to follow.  It was groundbreaking stuff. 12:20
On carrying on the legacy of Genesis – Genesis, very much unlike The Beatles, tended to, almost to a man, denounce the past, whereas I celebrate it, I think it was the absolute epitomy of what Genesis was capable of before it was capable of having a string of hit singles. 15:50
I’ll leave everyone else to stick to their guns. If they want to divorce themselves from their past that’s fine but that’s where I come in. 17:15
(The other members) will someday come to know the place when they return to it but I’ve returned to it first and I think it’s not just worth celebrating but a glorious moment in time. 18:00
On the question of performing with Genesis again – I know rumors abound but I would prefer to perform the music politics free.  I think the five guys in Genesis have five separate ideas as  to what Genesis was all about. 18:35
On GTR – We had a hit single with “When the Heart Rules The Mind” which I thought was the best of what (Steve Howe) and I were capable of. I thought it was an extraordinary song. 19:10
On reuniting GTR – With each passing year it gets harder, people have their own priorities. It’s not as easy as you might think to put teams together. 21:45
Connect with Steve:
Facebook | Twitter | Official
Share. Facebook Twitter Tumblr Email