With the release of the brilliant Amaryllis in 2012 Shinedown established themselves as a leader of the new breed of rock bands.  They steadily grew over their first three records and put out a sharp, focused record that showed off the stunning vocals of Brent Smith and solid songwriting of Smith and Dave Bassett.  The follow-up, 2015’s Threat to Survival, was a bit of a scattered affair and a step back but I had high hopes for a strong effort on Attention Attention. 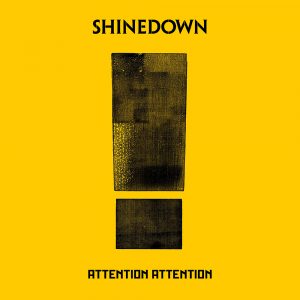 While the band is the same, one noticeable change on this record is in the songwriting partnership. Bassett, a professional songwriter and Smith’s partner on the last three records only has 4 writing credits this time around.  This is a big change as the songs are ultimately the downfall.  The tracks run the gambit of every genre from hard rock to rap to funk to the obligatory ballad but there is no continuity or focus.  Even though the idea is an album that tackles human emotions and facing who you are, musically it comes across more as a collection of random songs than a comprehensive whole.
All the Shinedown trademarks are present on the record, big choruses, anthemic songs about empowerment, loud guitars but this time all those trademarks sound contrived and forced.  You can hear the gang chorus coming from a mile away and the anthems just sound tired at this point.  This is a band with so much potential but after hitting a peak it seems like they aren’t sure where they want to go.  Brent Smith is one of the greatest singers in the genre, hopefully he can focus his songwriting a bit and get back to form on the next record.
Share. Facebook Twitter Tumblr Email