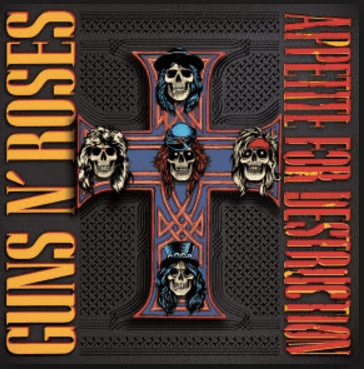 We’ll take the review one disc at a time. First up, the remaster of the classic studio record. I’m always worried when these special editions come out, my first thought is usually “why? “.  Mike Clink’s production on Appetite was perfect, the work on this edition is even better.  The sound is immense.  There is no change to the mix of anything, just an overall cleanup and boost.  All the dirt you loved from the original mix is there.  They found a way to keep the vibe while making it sound amazing on  modern audio equipment.  There’s really nothing else to say about this, you know the songs, you love the songs and they sound glorious mastered for high quality vinyl.

On to the first disc of “bonus material”.  “B Sides N’ EPs:Remastered” is exactly that, remastered versions of songs we’ve all heard before.  Featured here is the entire Live ?!*@ Like a Suicide EP including the first appearance of “Shadow of Your Love” which was left off the original release, the acoustic side of the G N’ R Lies EP, plus 3 live songs from a 1987 London show and an alternate acoustic version of “You’re Crazy”.  Much like the first disc, these are songs that have been widely released but cleaned up to sound incredible. The ferocity of the early days of this band comes through on the three live tracks.

The most interesting part kicks in with the last two disc, the infamous 1986 Sound City Sessions.  These tapes have existed in bootleg form for 30 years, but hearing them totally remastered is a revelation. The band entered the studio with Nazareth guitarist Manny Charlton producing and recorded every song they had in their live set, 25 of them make it to this set (not sure why early versions of “Don’t Cry” and “You Could Be Mine” from the original bootleg didn’t make it).  They show a fascinating evolution of these songs.  All of what became Appetite, except “Sweet Child O’ Mine”, can be heard here in their raw form.  It’s interesting to hear the music is close to being fully formed while Axl is still testing various lyrics and melodies.  Listening to the band in its raw, embryonic state really does make you miss Izzy and Steven.  This is the sound of 5 hungry street kids who knew there’s no doubt they would take over the world.

There are a few very interesting tracks found here, including two really early versions of “November Rain”. The first is Axl on piano and vocal and clocks in at nearly 10 minutes, the second features Axl and an acoustic guitar.  The lyrics are still being formed but the evolution of the song is amazing to hear.  Whenever you have a set with songs that didn’t make the record (“November Rain”, Back Off Bitch”, “Shadow of Your Love”) the question of “why isn’t that on the record?” always comes up.  In this case I think it’s a simple answer, “November Rain” and “Back Off Bitch” were more sketches than complete songs at this time.  You can tell they were  works in progress.  With “Shadow” it’s a little different.  It is a great song, but it’s not a good fit on Appetite.  Great records are usually great because of the feel, the vibe, the running order of the songs.  Hearing the 3 different versions of “Shadow” on this set you can tell that it was an early composition by the band.  It doesn’t have the swagger or attitude as the songs that came after it.  In my opinion, Appetite is a much different record if that song was included.

I do think it’s important to talk about the one huge omission from this set, “One in a Million“. When first released on G N’ R Lies the lyrics caused a major controversy.  Axl’s response was he wrote about what a kid from Indiana thought when he first stepped of the bus in mid-1980’s LA.  Can the lyrics be seen as offensive? Yes. Is censorship in music ever OK? No. I can understand people having strong feelings about this song, but pretending it never existed and erasing it from the historical document that this set is rather than having the conversation about the lyrics is just wrong.

If you’re a huge Guns fan there is nothing here you haven’t heard before, but you’ve never heard it like this.  The Sound City Sessions get a production that just wasn’t possible on those old bootlegs.  Whichever version you opt for you cannot go wrong.  Guns N’ Roses just set the bar for what a perfect anniversary edition should be.