Myles Kennedy – Year of the Tiger

I wanted to love this record. To my ears, Myles Kennedy is one of the best, most versatile singers in rock.  I’ve always thought of him as someone that needs the right partner to meet his songwriting potential.  To that end, I prefer his work with Slash  to Alter Bridge simply because the songs were better, Bent to Fly is an absolute classic.   I think Year of the Tiger proves that Myles needs a foil to write that perfect song. 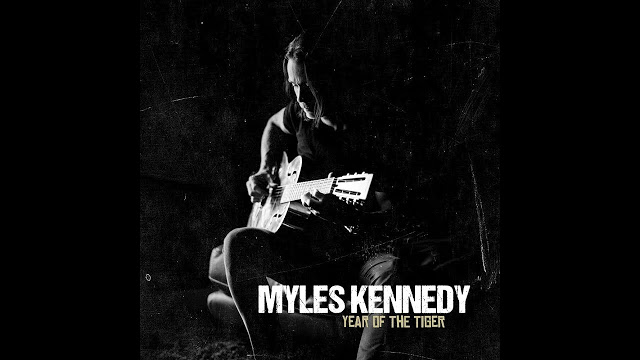 This is a deeply personal record, the year referred to in the title is 1974, the year his father passed away.  The lyrics deal with themes such as loss and redemption, reconciliation and religion. As always, Myles’ lyrics are brilliant and thought provoking. The music is a swampy, acoustic feel that allows him to stay in a lower register as opposed to the all out rock voice used with Slash and somewhat with Alter Bridge.  The production by long time Myles Kennedy producer Michael “Elvis” Baskette (all of the Alter Bridge & Slash records) is just perfect.  Each instrument is clear and crisp with that voice taking center stage throughout.

Where the record falters a bit for me is that the songs just aren’t very memorable.  After the first listen I couldn’t remember any song other than the fantastic opening title track.  They all kind of blend into each other.  It has begun to grow on me and I discover more with each listen.  The mid-album run of Ghosts of Shangri La/Turning Stones/Haunted by Design definitely stands out. When the record ends, however, there really isn’t a song stuck in your head that makes you want to go back again and again.  It’s obvious that writing this was a therapy session for Myles, exploring his childhood, life and beliefs.  It made for powerful songs but not ones that I will find myself going back to very often.  I wanted to love it, but only just kinda liked it..